During spring 2017, the Crochet Coral Reef was on exhibit at the University of California Santa Cruz’s, Mary Porter Sesnon Gallery in an exhibition highlighting the plastic and toxic dimensions of the project.

At the IFF, we have long been admirers of the university’s history of consciousness program, an important site of interdisciplinary research and practice in the sciences and arts. Donna Haraway, a Distinguished Professor Emerita of the program, is both a friend to the Reef and an enduring inspiration for our work – Haraway writes about the Reef in her 2017 book, Staying With the Trouble: Making Kin in the Chthulucene, and also penned the elegant Forward to our Crochet Coral Reef book.

When UCSC began its new cross-disciplinary venture, the Institute of the Arts and Sciences, inaugural director John Weber approached us about bringing the project to Santa Cruz. Together with the IAS we worked to create an exhibition focusing on the “refused” aspects of the Reef – the plastic trash and refuse we have been incorporating into our sculptures since 2006 as an artistic response to the Great Pacific Garbage Patch. On display was a newly imagined version of The Midden  – a sculpture that consists of four years worth of Christine Wertheim and Margaret Wertheim’s domestic plastic plastic trash: every plastic bottle, bag, wrapper and piece of plastic garbage that passed through their home from January 2007 t0 April 2011. Curated on-site at the Sesnon Gallery by Christine, here the trash was suspended from the ceiling in a fishing net, in a darkened room, which visitors then explored with flashlights, as if  diving in the ocean under a giant gyre of rubbish. The UCSC exhibition also featured a novel installation of our giant Coral Forest – six totemic sculptures (three crocheted from yarn, and three from plastic), set against a bold red background, a “red sea” of woolen tentacles in which visitors snuggled and cuddled.

Crochet Coral Reef: CO2CA CO2LA Ocean and the UC Santa Cruz Satellite Reef are sponsored by the Institute of the Arts and Sciences in partnership with the Mary Porter Sesnon Art Gallery and the Seymour Marine Discovery Center. The Institute of the Arts and Sciences, part of UC Santa Cruz’s Arts Division, is an interdisciplinary programming unit, which creates public exhibitions, public events, publications, and collaborations with faculty and students, aligning with UCSC’s teaching and research. The Sesnon Gallery encourages interdisciplinary discourse through the lens of the arts.

The IFF’s work for Crochet Coral Reef: CO2CA CO2LA Ocean was generously supported by a grant from the Opaline Fund of the Jewish Community Federation and Endowment Fund. 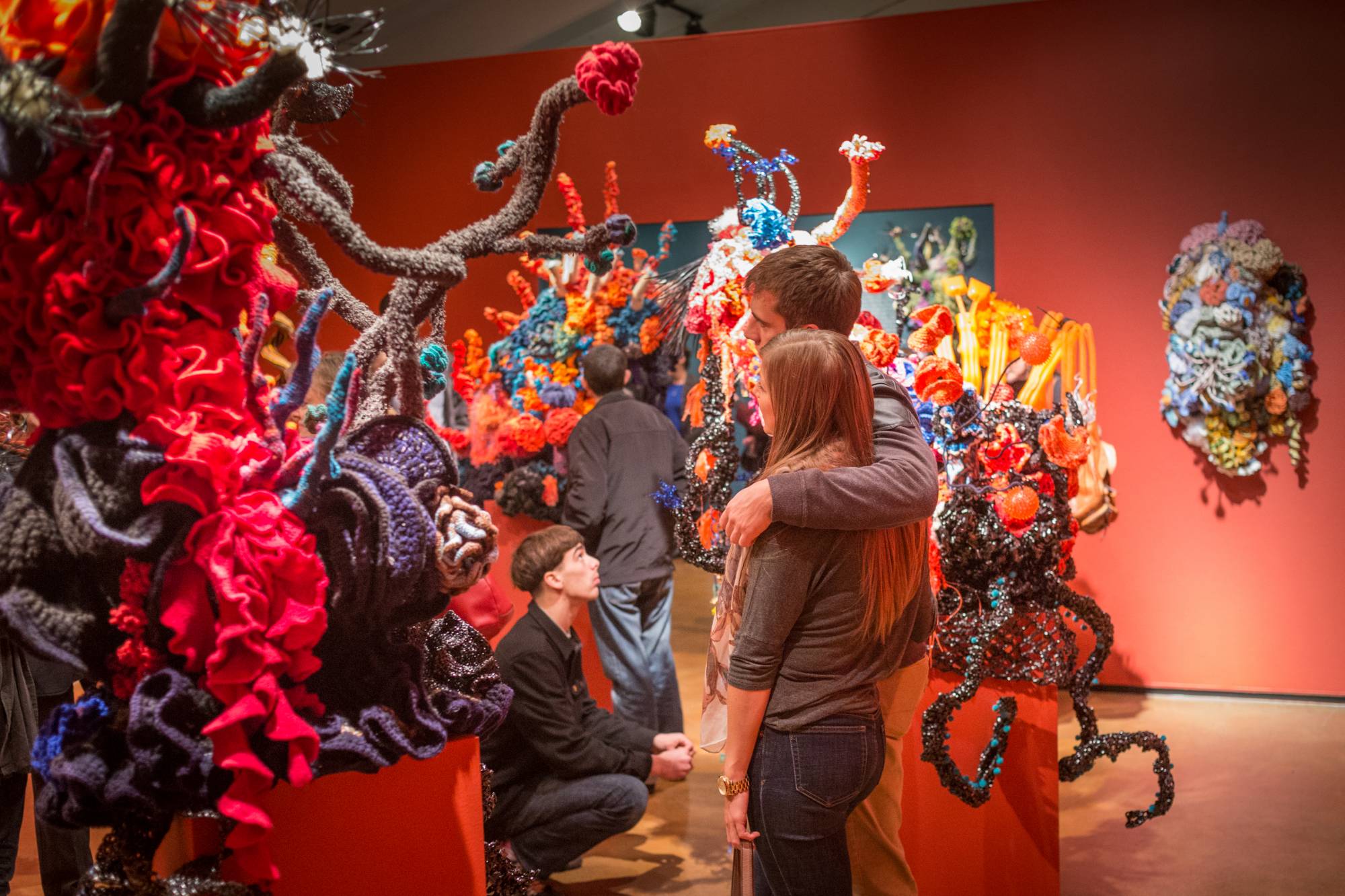 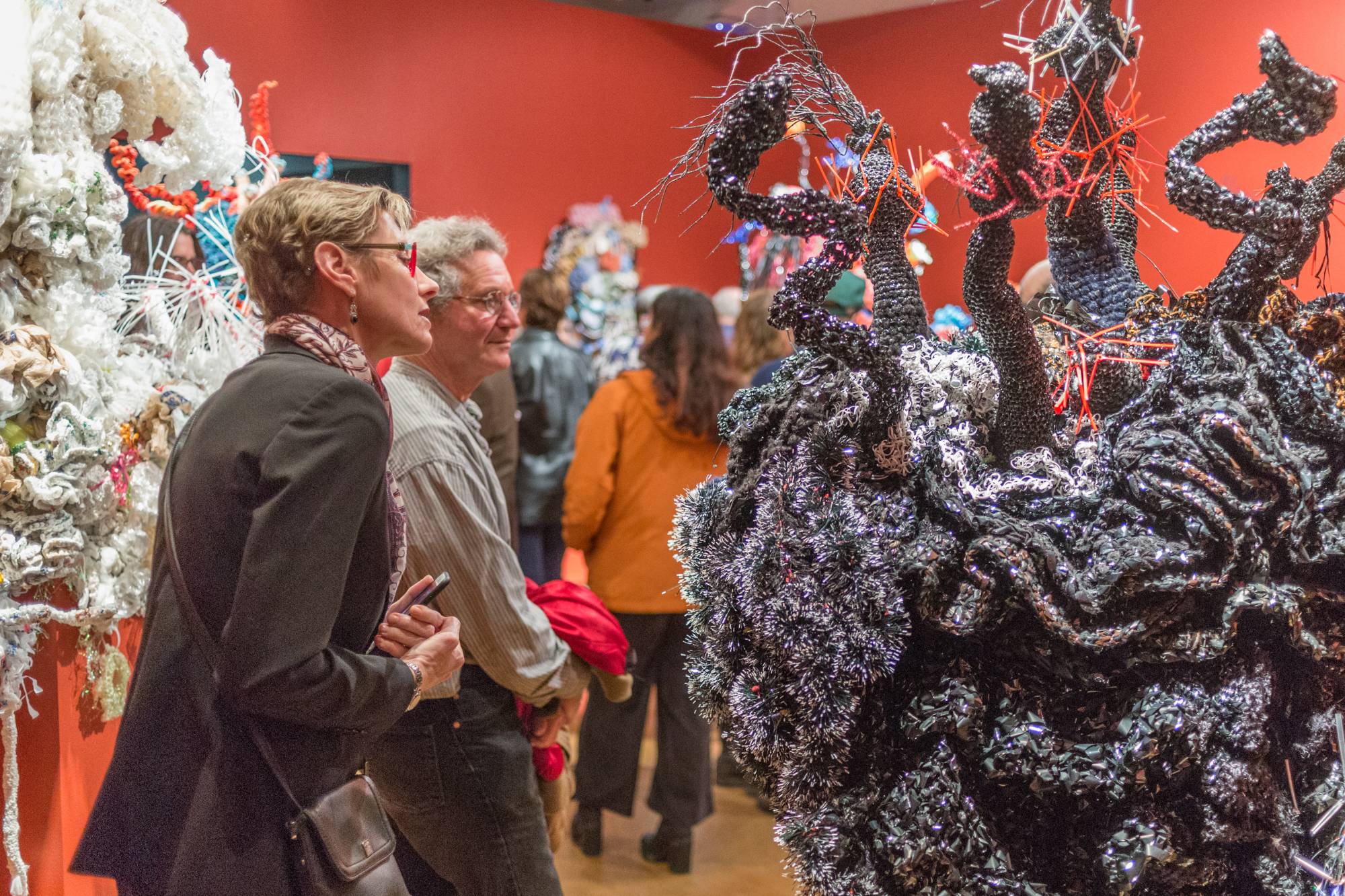 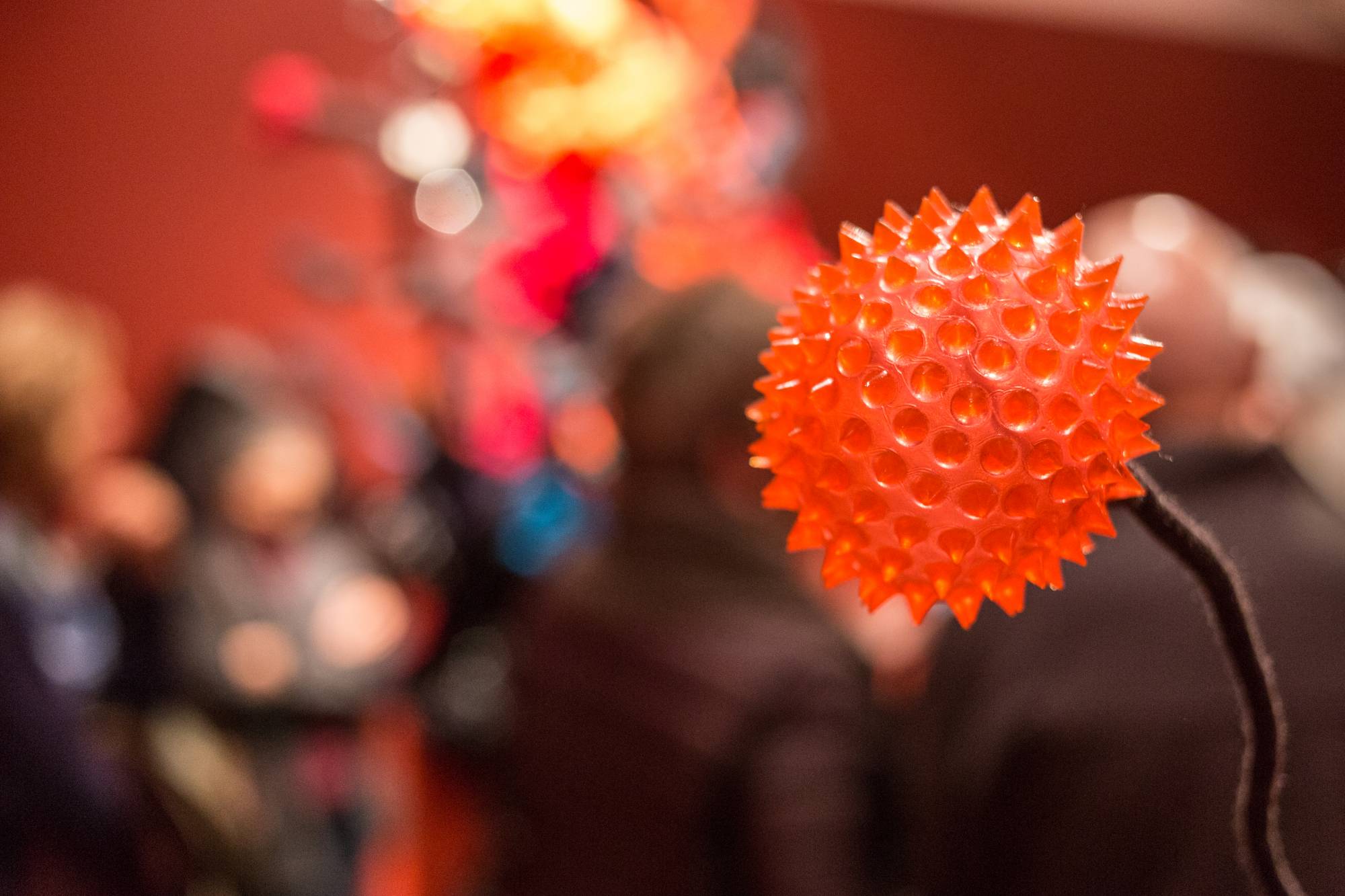 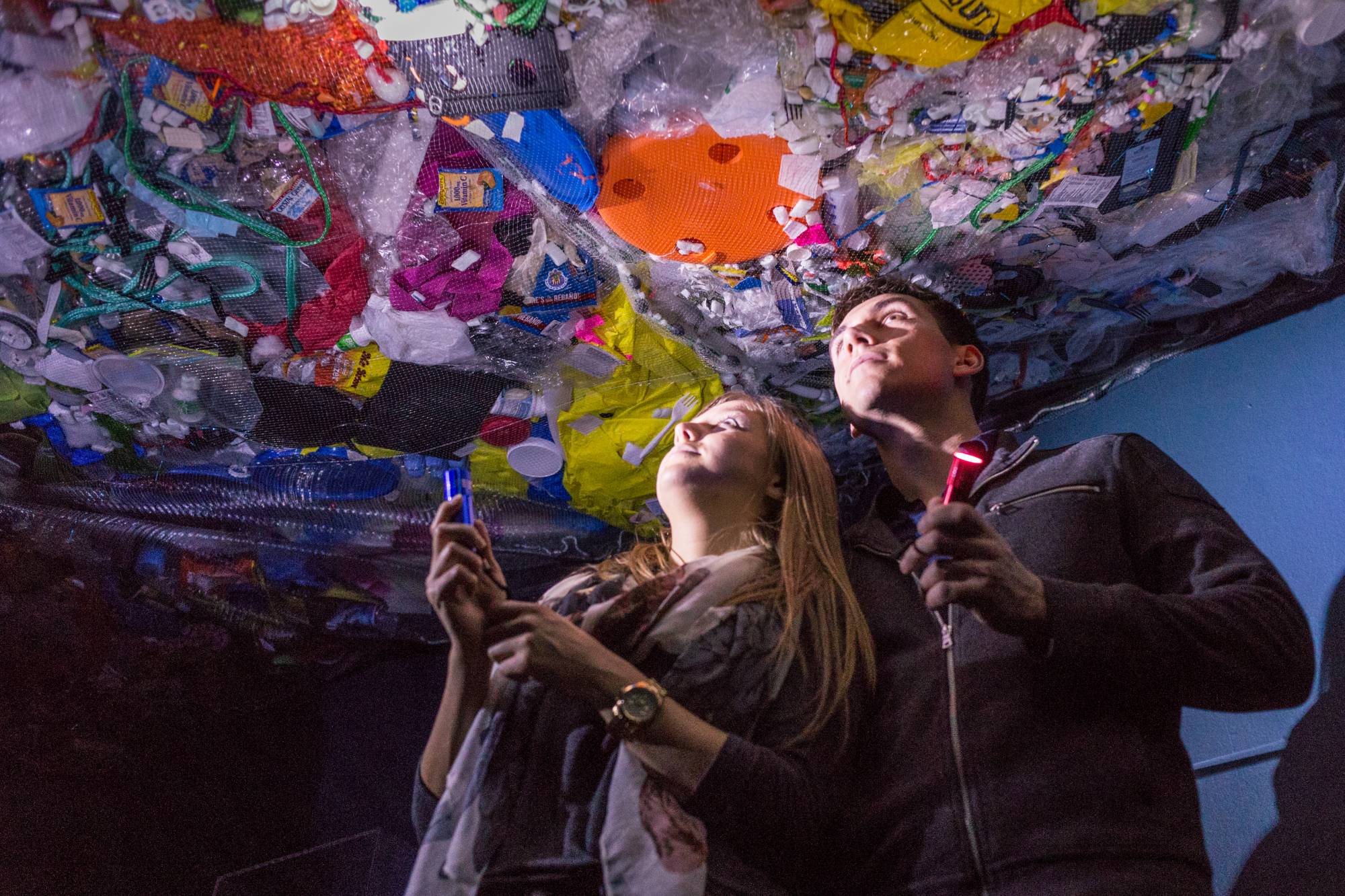 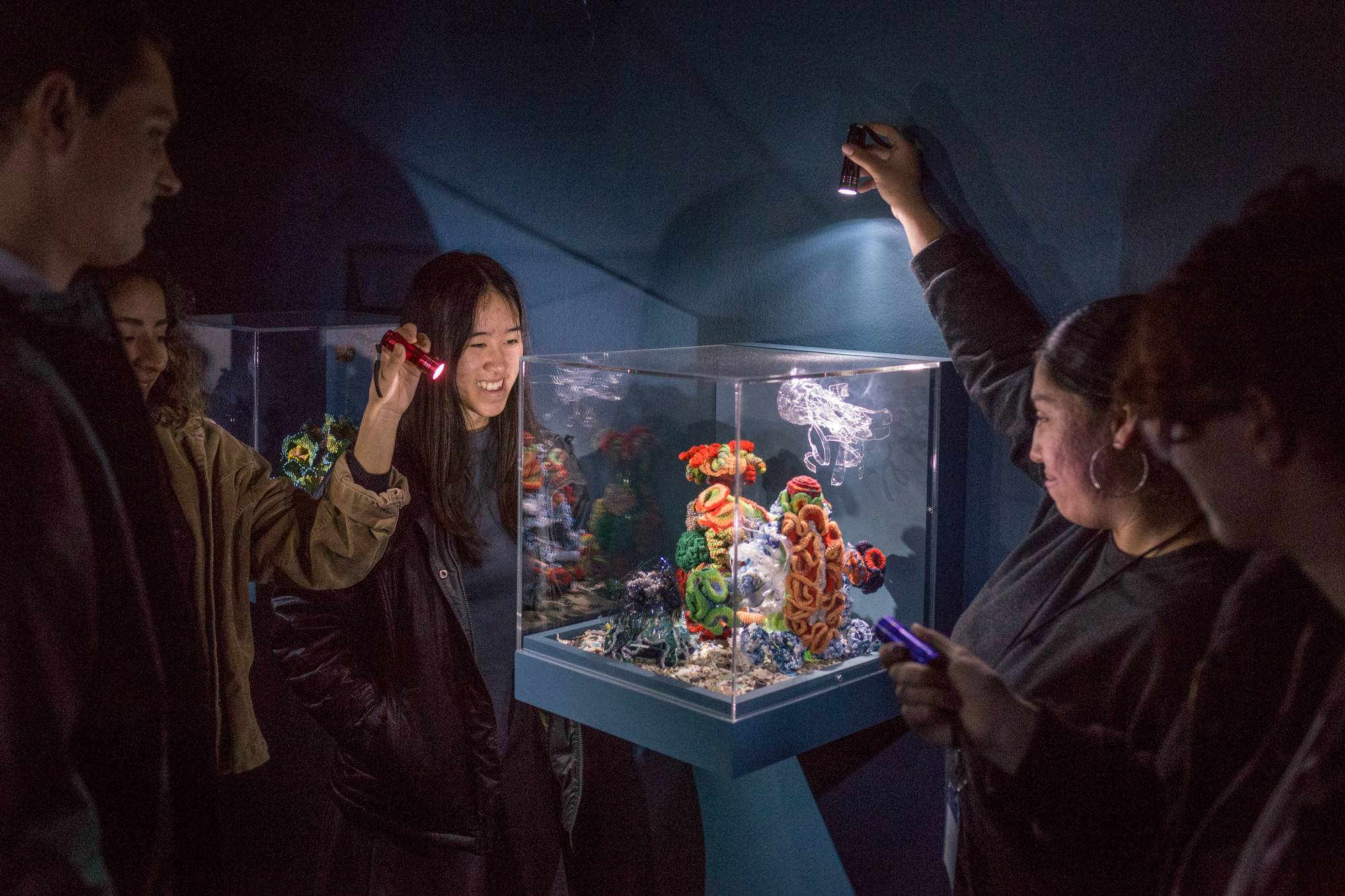 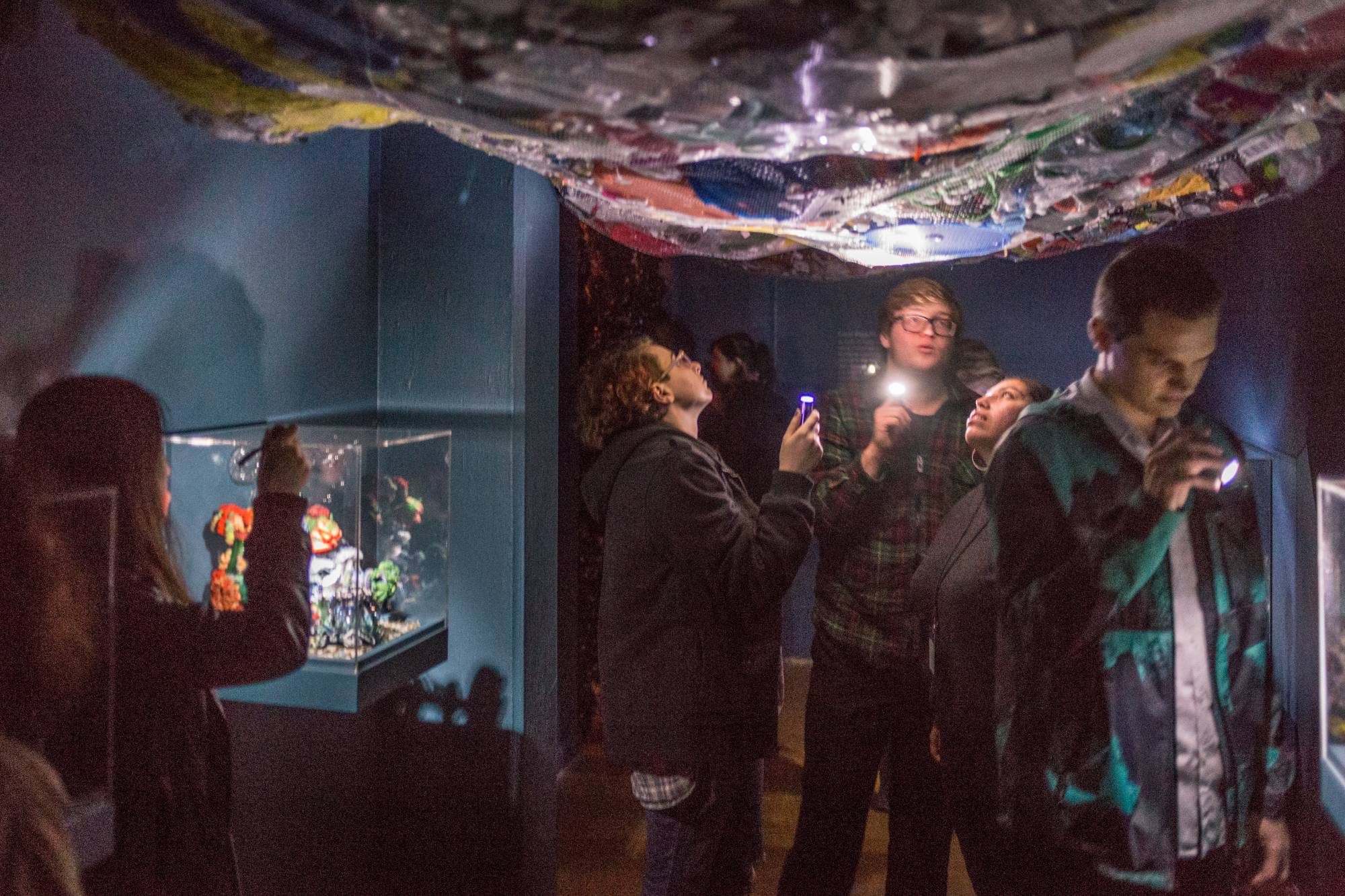