While parts of the Crochet Coral Reef were in the 2019 Venice Biennale, other works from the project were on show at Lehigh University Art Galleries in Bethlehem, PA.

In Venice, our two installations focused on the delicate natural history dimension of the project highlighting the bejeweled confections of our Bleached Reef, our Toxic Reef, and a selection of miniature coral Pod Worlds. At Lehigh, the show was framed around our six giant Coral Forest sculptures – three crafted from yarn and three from plastic – plus a newly updated version of our Branched Anemone Garden.

Where the yarn-based Coral Forests reference the organic beauty of living corals, the plastic Forests call attention to the post-modern present suffused with synthetics. These six timely sentinels – named after the Gorgons of Greek mythology: Medusa, Stheno, Eryali, Ea, Nin Imma and Chthulu,  – stand as a surreal undersea grove inviting visitors into a space of contemplation at once joyous and tragic.

Nestled within the Forest was a vitrine housing our Branched Anemone Garden, a crocheted diorama inspired by the Great Barrier Reef, and by the blood-orange hues and paleolithic drama of central Australia’s Hamilton Range. For the Lehigh exhibition, the work was radically updated so that here it was shown in-the-round. This expanded version allows the piece to be viewed from a “perspectival point” at each end of the vitrine, enabling viewers to see the coraline landscape reflected in the plexiglass on both vitrine sides and in its ceiling. The effect is as if one is seeing the work simultaneously in the flesh and in 3 surrounding persepectives. Thus the viewer encounters 4 reefs at once.

The works on display at Lehigh University Art Galleries are crocheted by Margaret and Christine Wertheim, with contributions from:

plus Tija Viksna and the Latvian Satellite Reef crafters. 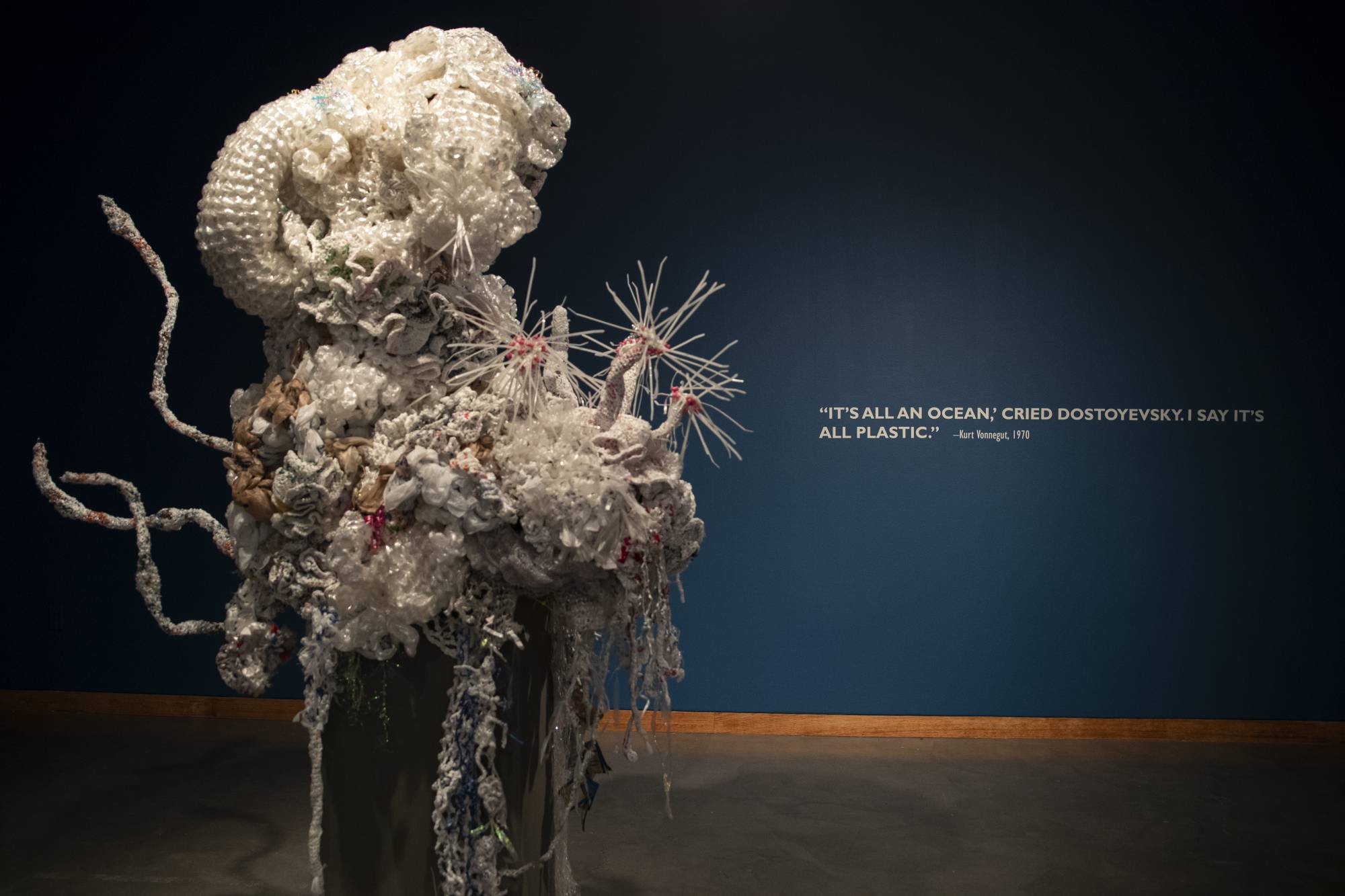 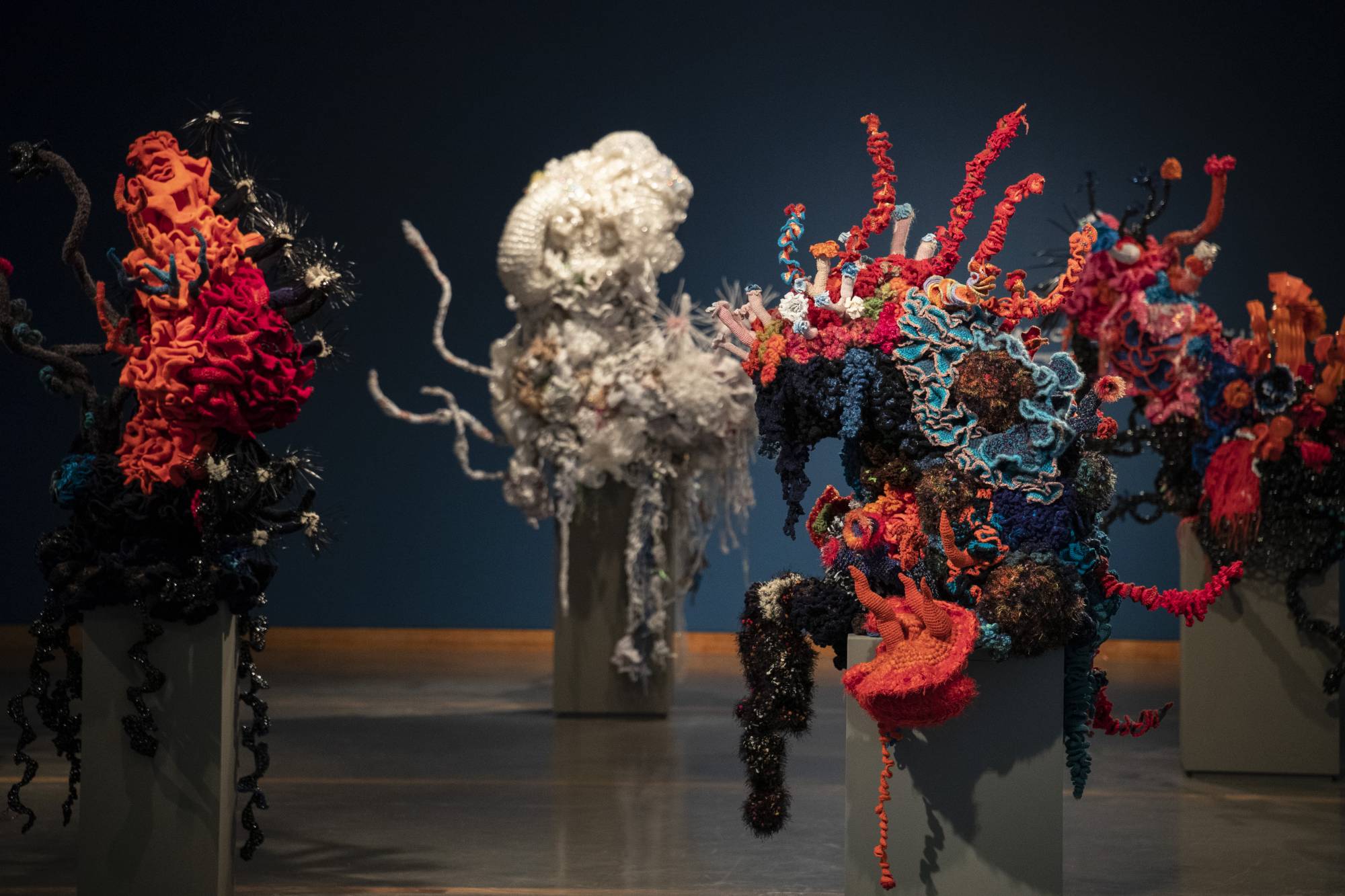 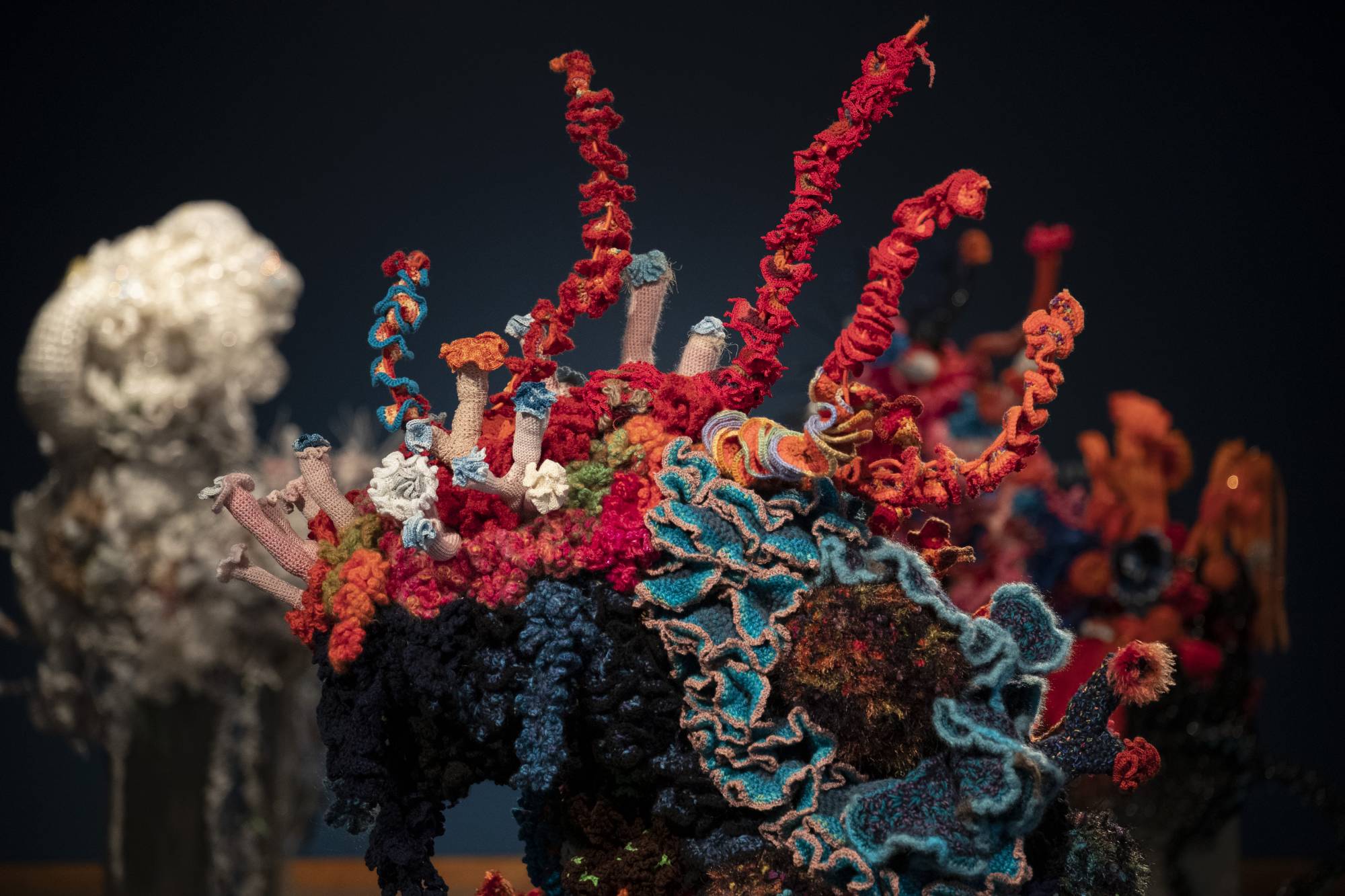 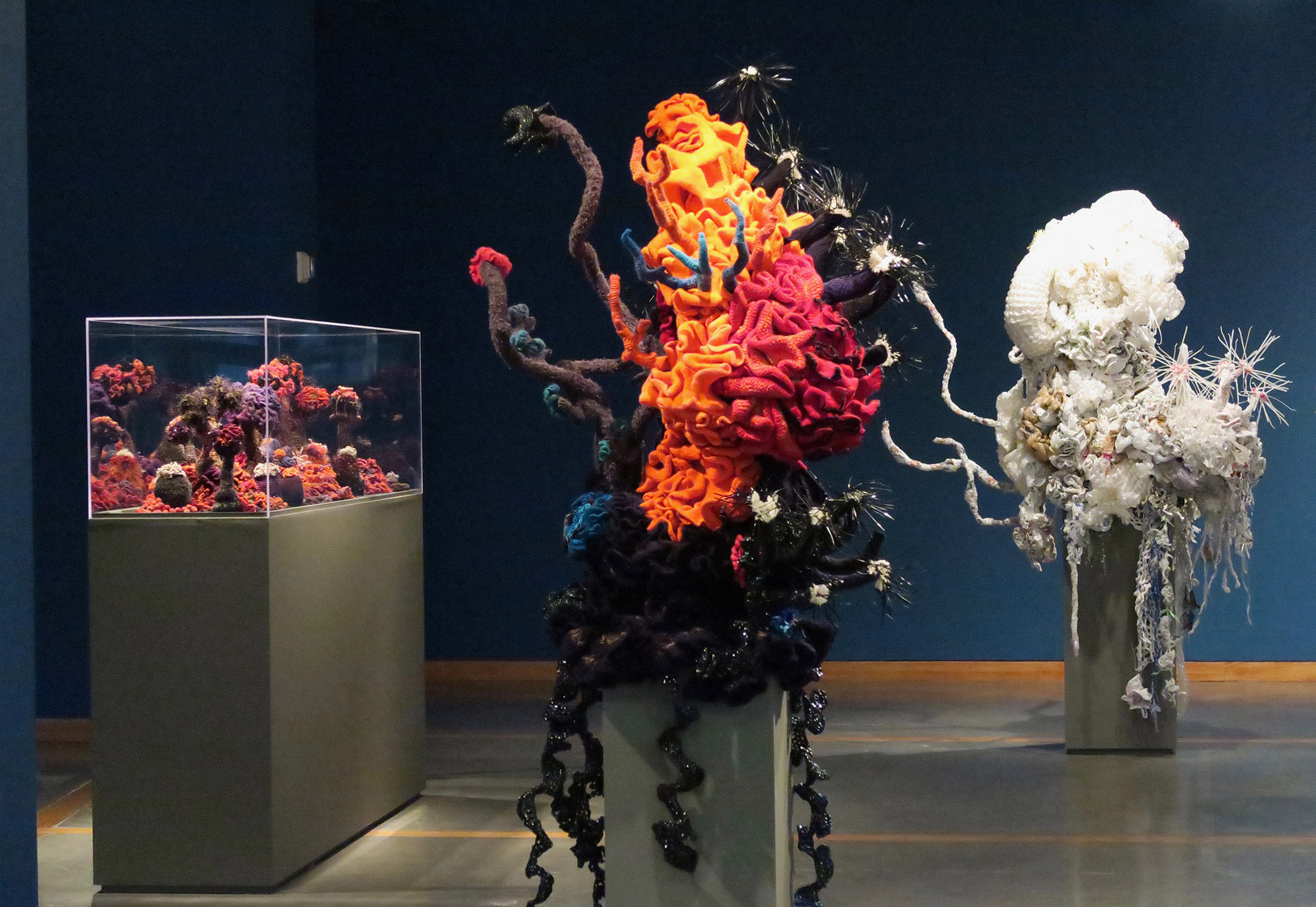 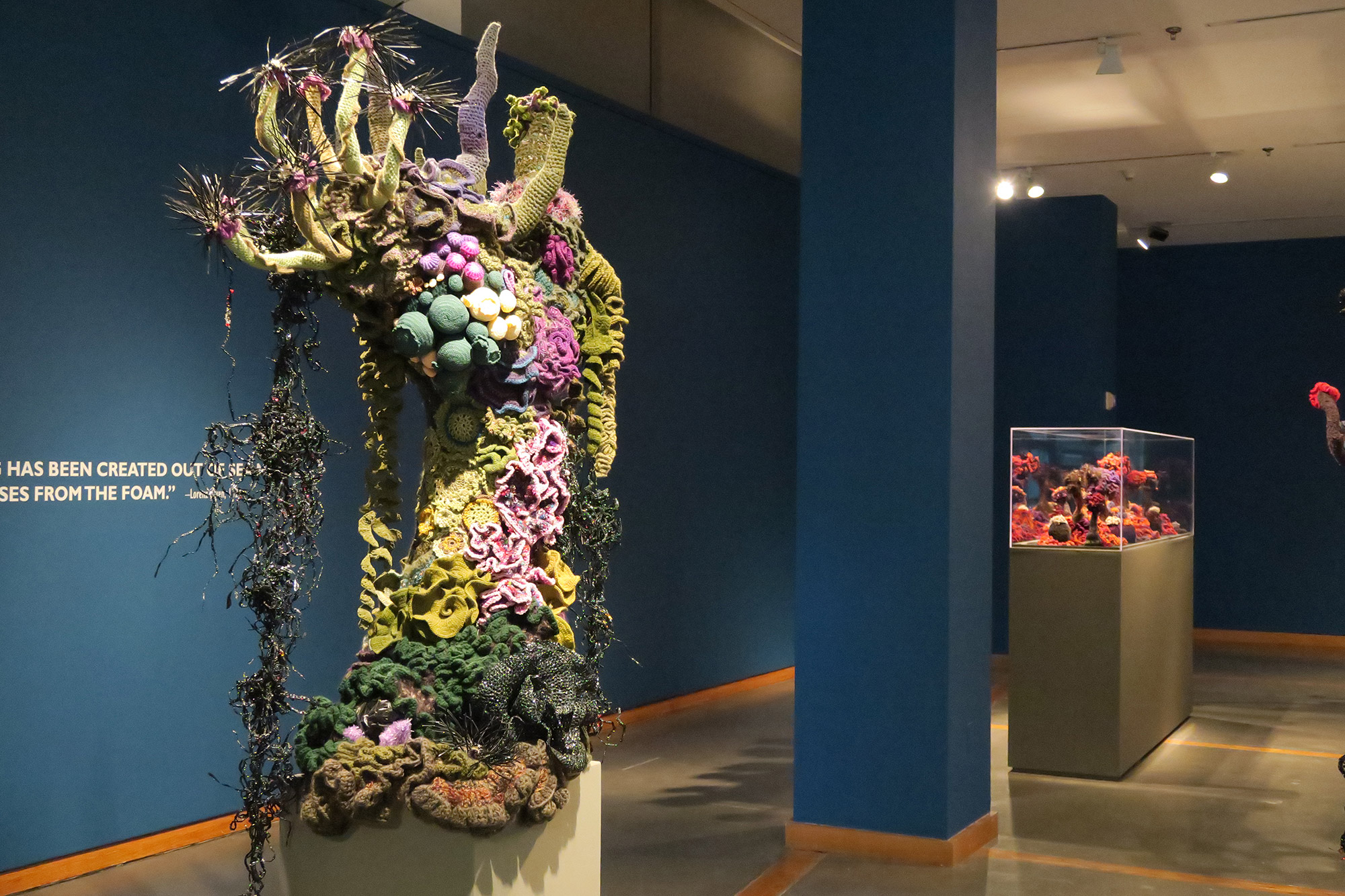 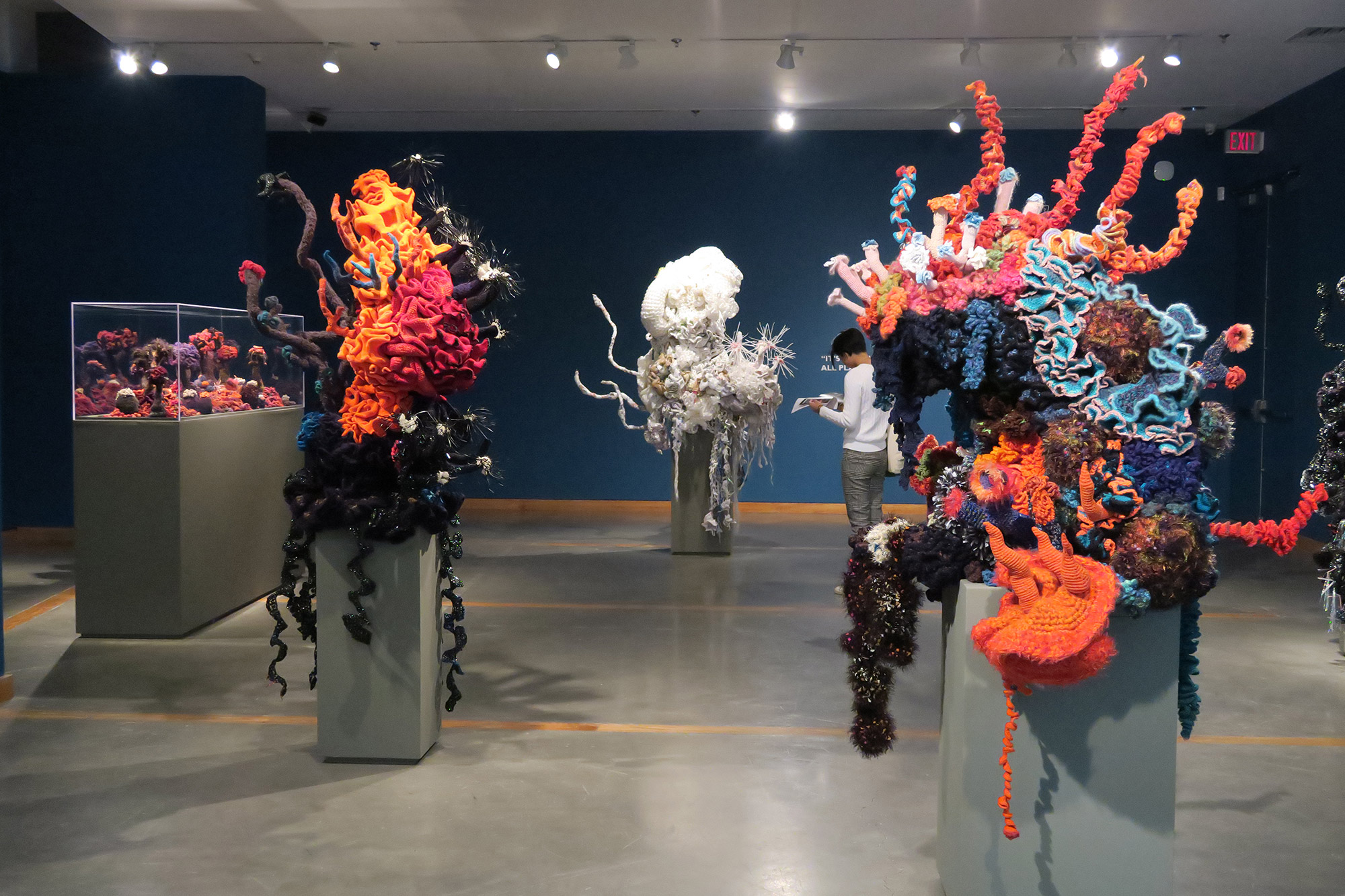 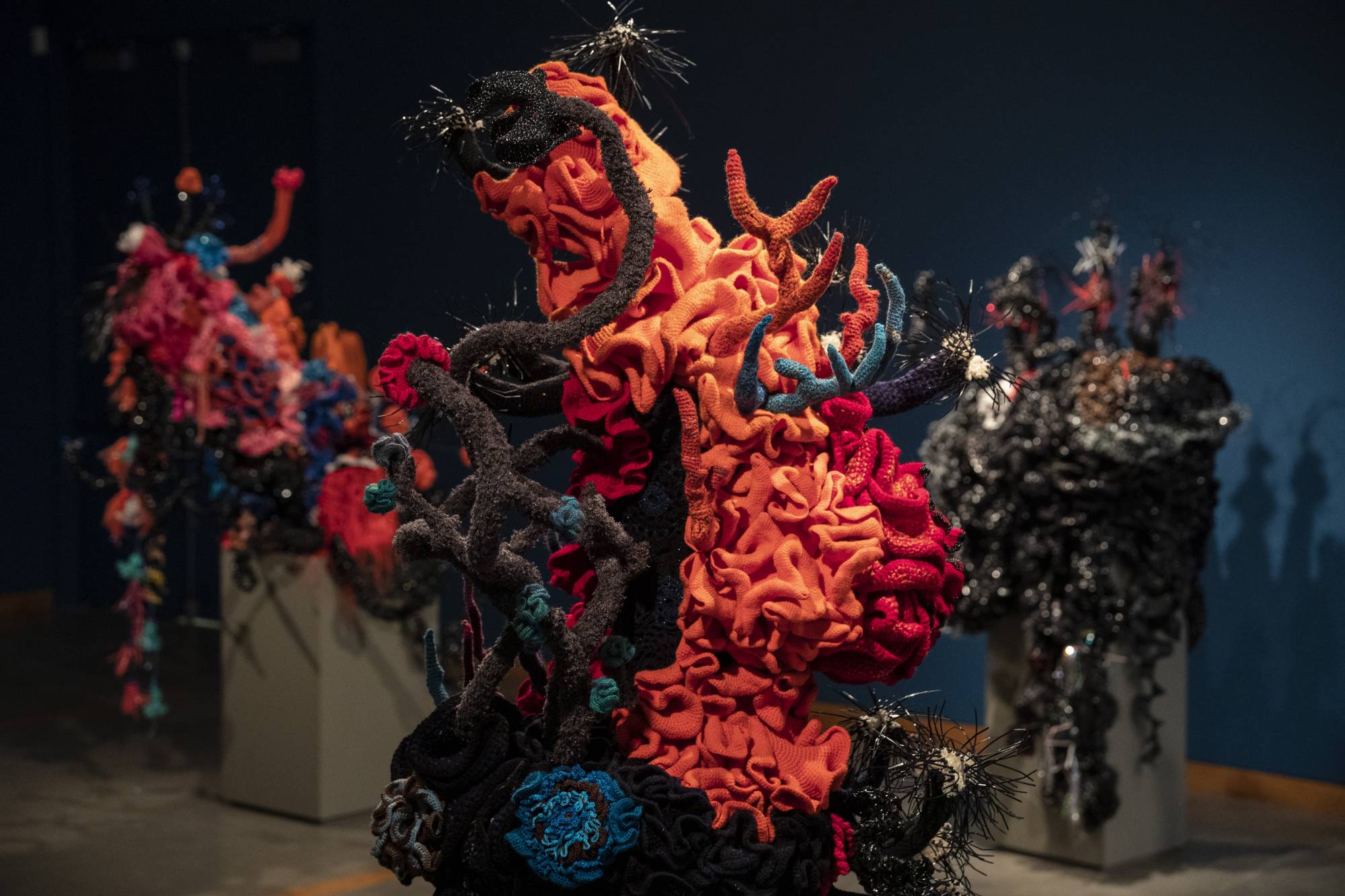 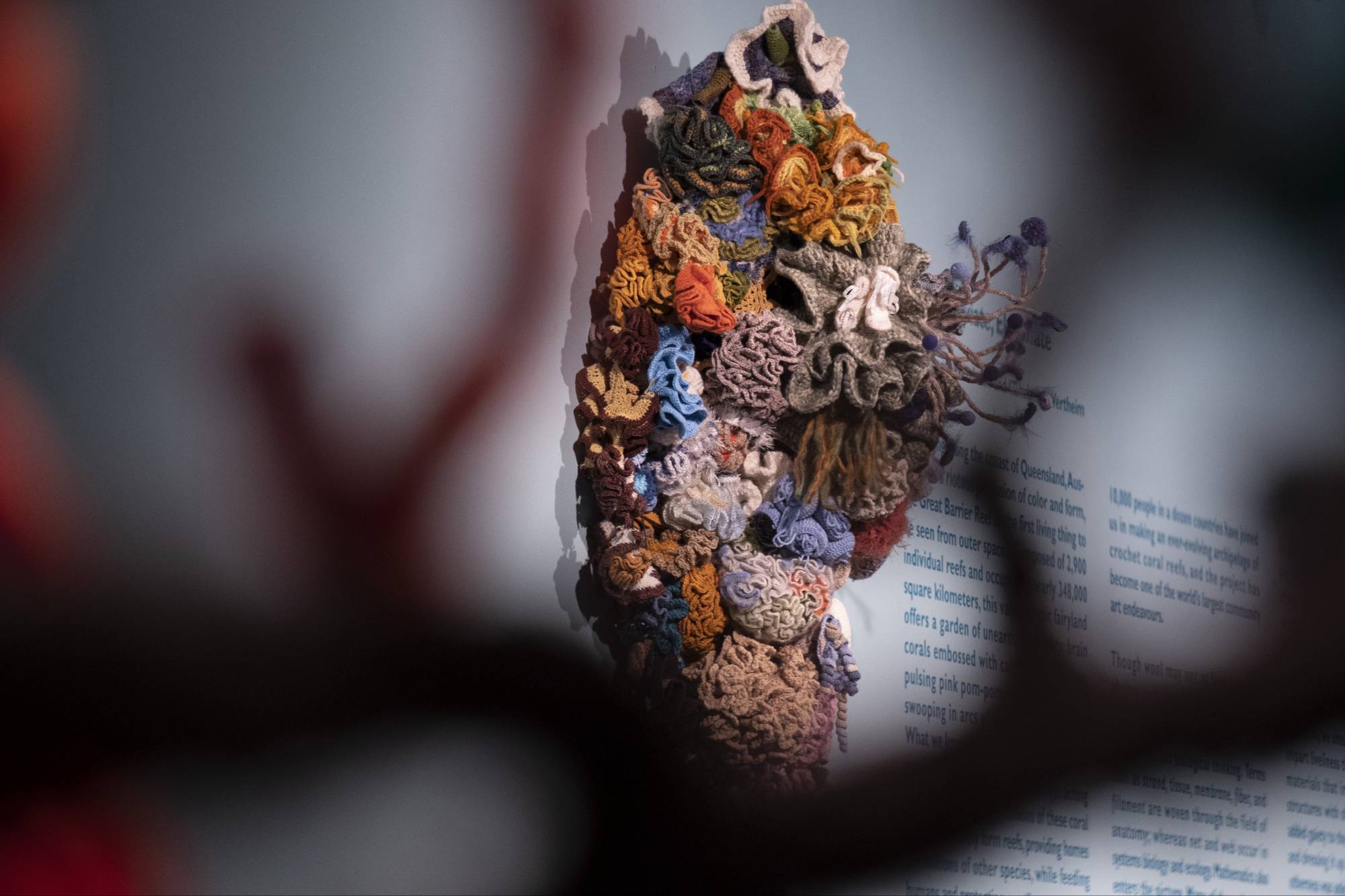 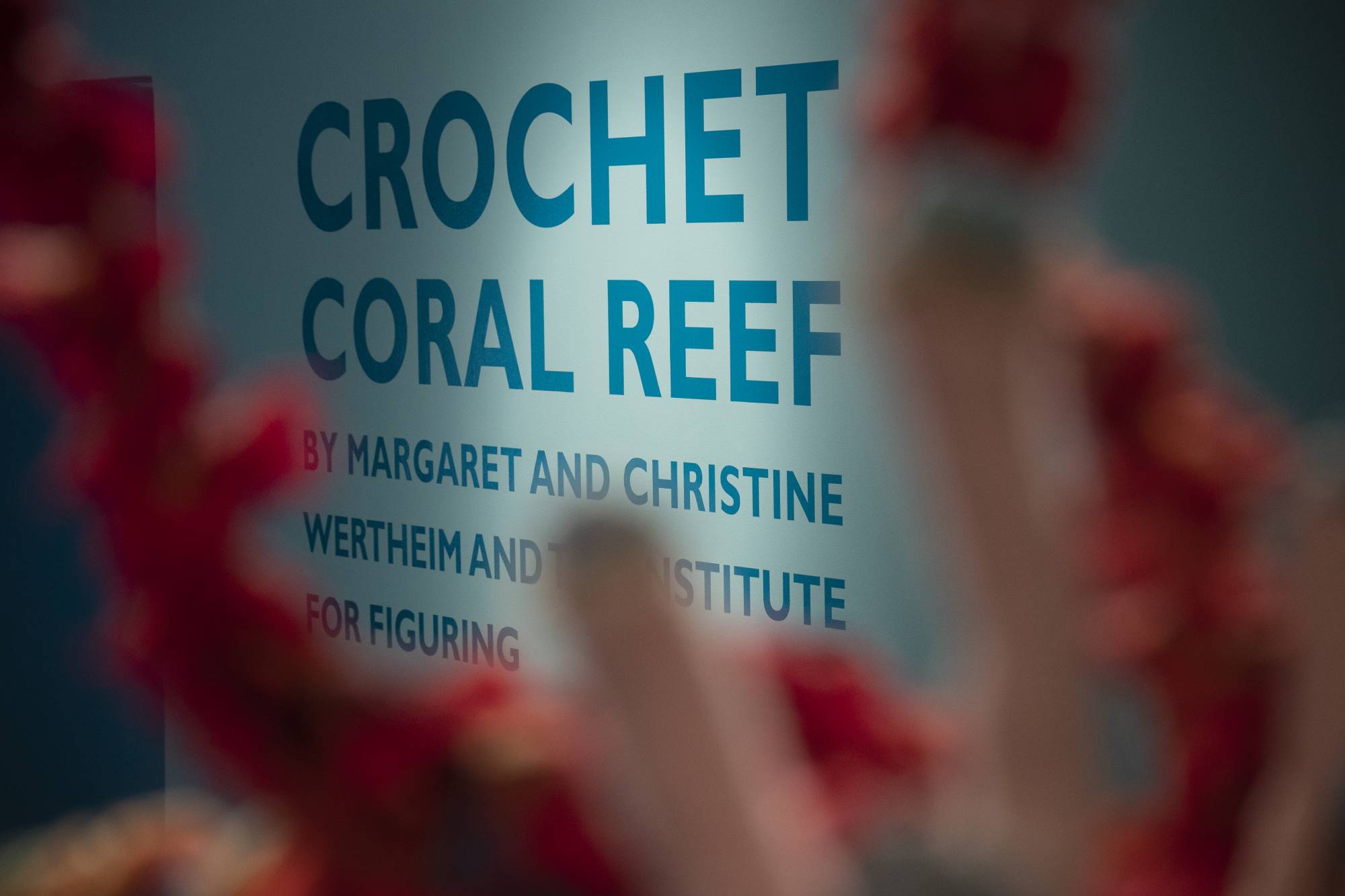 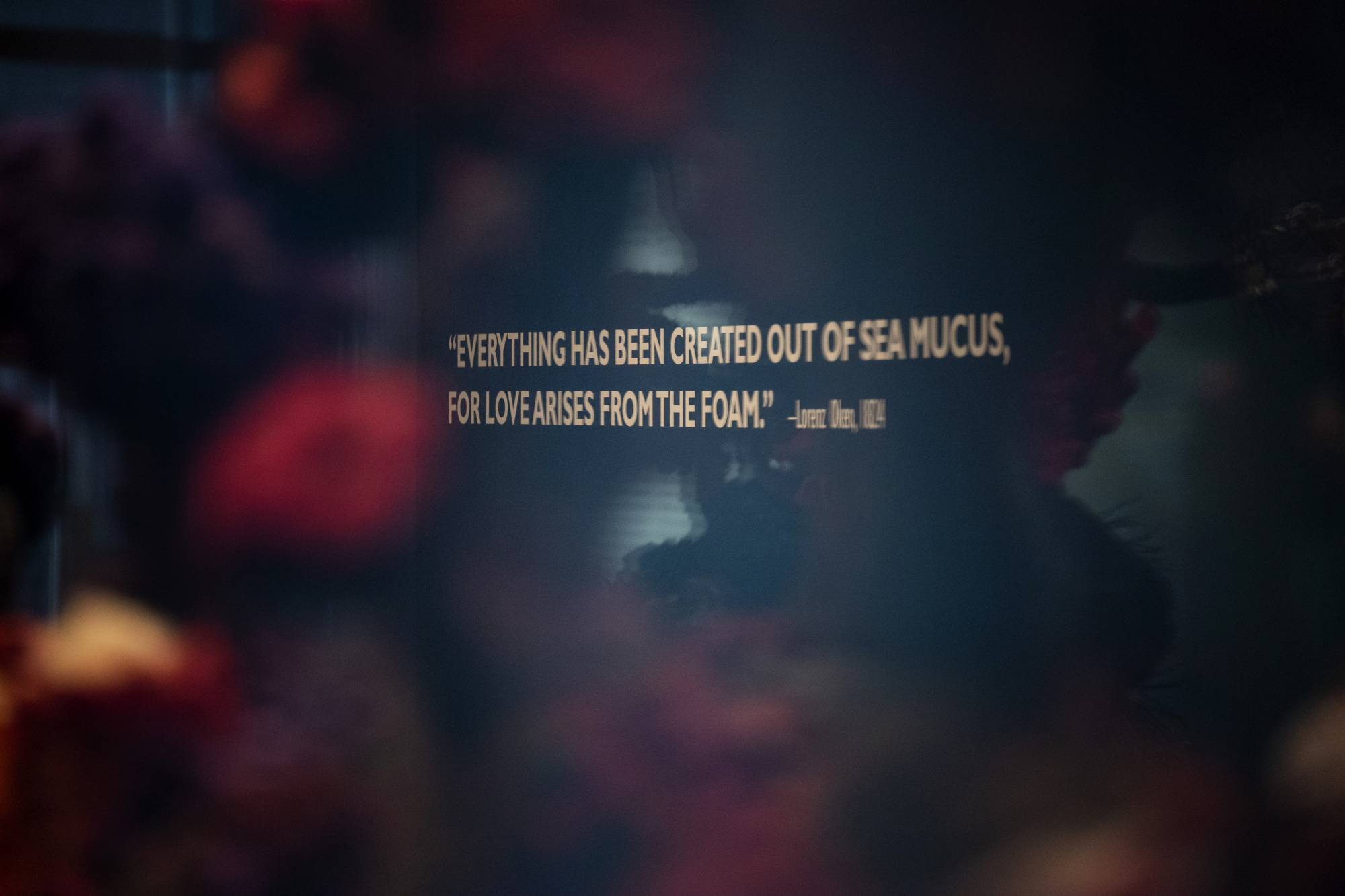 The IFF acknowledges ongoing support for the Crochet Coral Reef project and our LUAG exhibition from the Opaline Fund of the Jewish Community Federation and Endowment Fund.

Influence:  LUAG personnel were inspired to stage this exhibition of the Crochet Coral Reef after hearing Margaret Wertheim interviewed on the NPR program On Being with Krista Tippet.

Slideshow images above, by Margaret Wertheim for the Institute For Figuring, and Stephanie Veto for Lehigh University Art Galleries.