In association with the New York Institute for the Humanities and the Steinhardt School at NYU, and arts>World Financial Center, the Crochet Reef is showing in Manhattan at two separate locations.

A selection of the IFF’s most complex and delicate sub-reefs will be on exhibition in the Broadway Windows space, across the road from historic Grace Church. The exhibition includes the Bleached Reef, the Branched Anemone Garden, and the Ladies Silurian Reef.

The Broadway Windows are located at the corner of Broadway and E. 10th St. 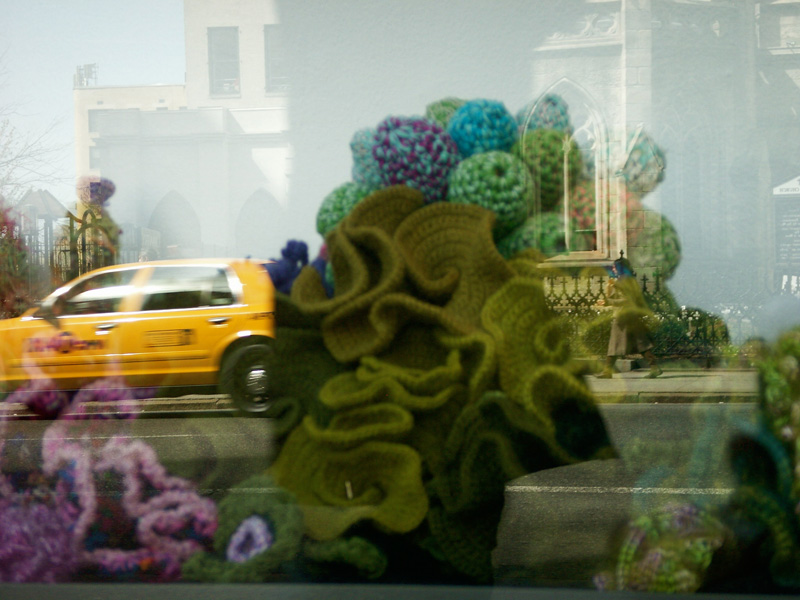 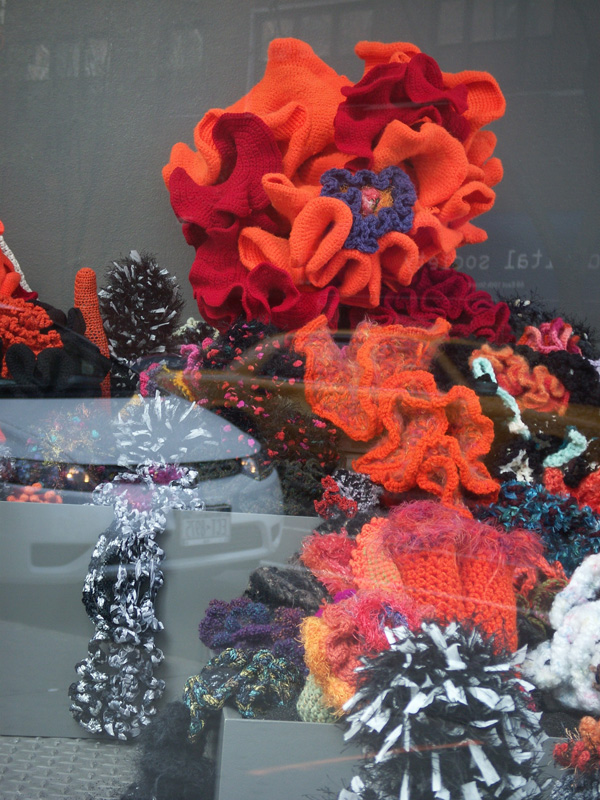 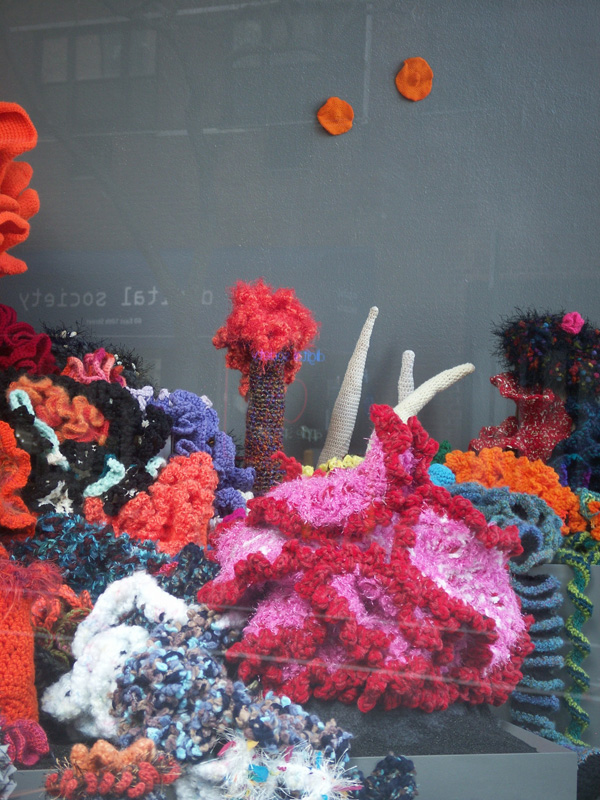 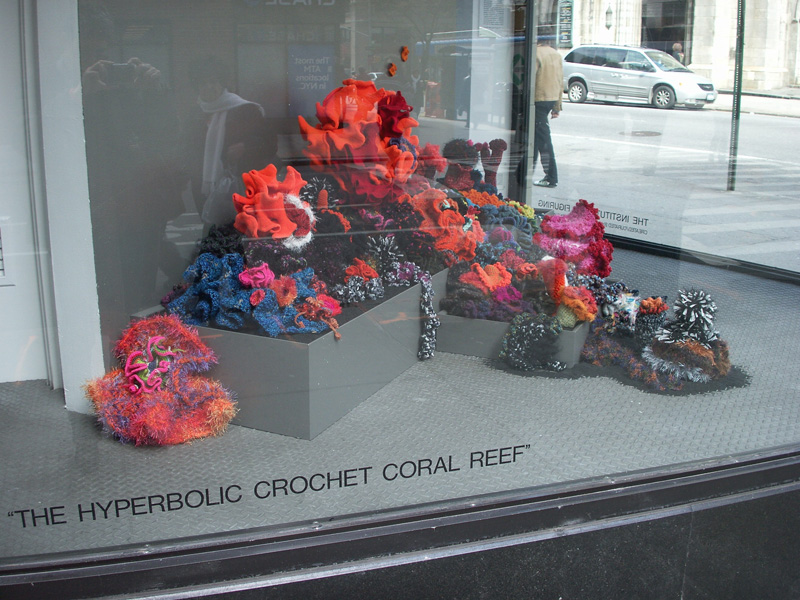 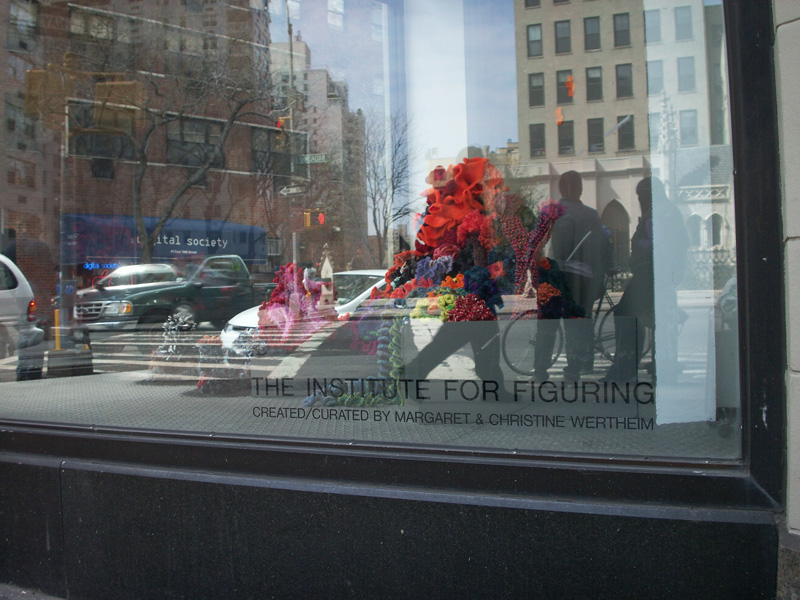 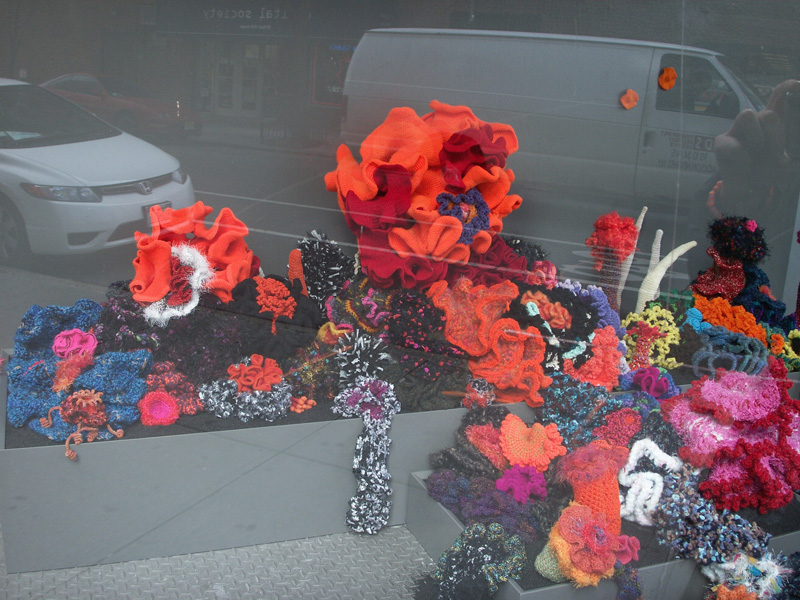 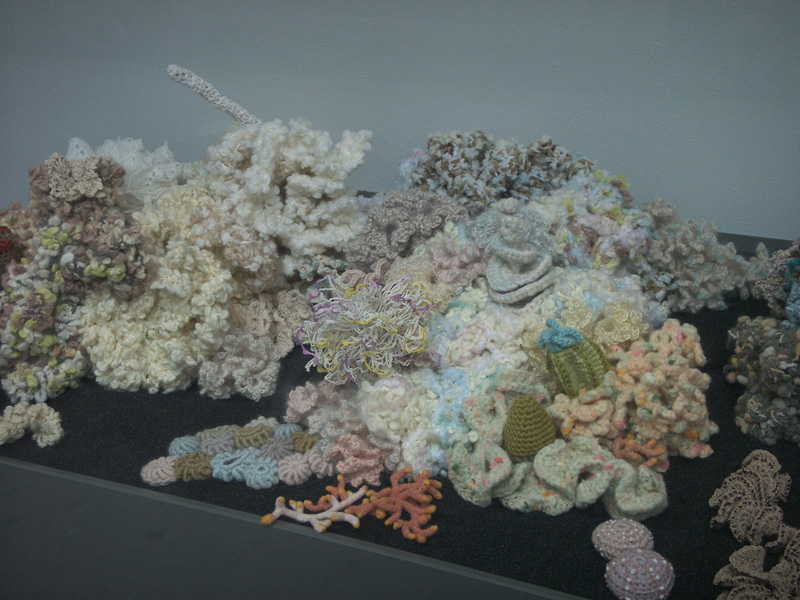 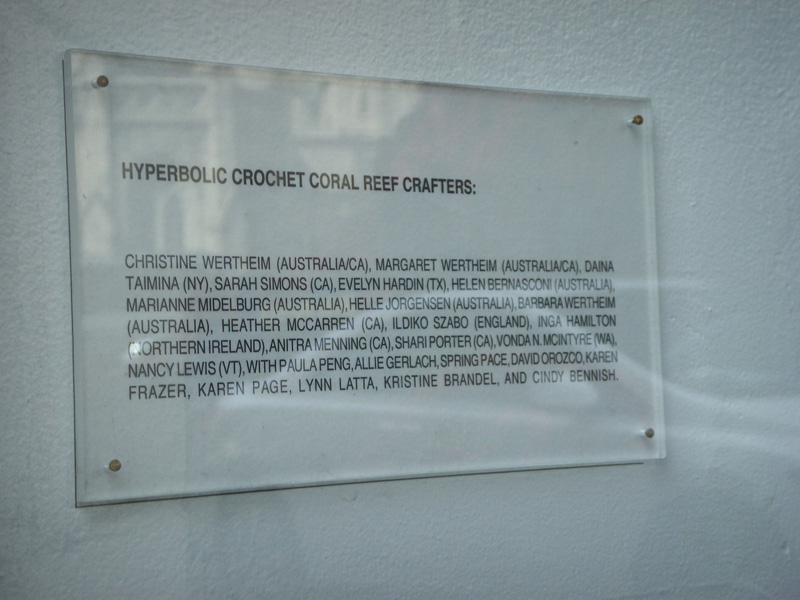 As a sister exhibition to the Broadway Windows site, a second exhibition will be on show at the World Financial Center, Winter Garden. On display here will be the IFF’s yarn-and-plastic-extravaganza, the Toxic Reef. The Winter Garden show will mark the debut appearance of the Rubbish Vortex, crocheted entirely from plastic shopping bags by IFF Australian contributor Helle Jorgensen. On display will also be a large cloud of plastic jellyfish forms by Irish contributor Inga Hamilton, Cambrian Explosion forms by Aviva Alter, hyperbolic octopii by Helen Bernasconi, Reefer Madness forms by Dr Axt, plastic diatoms by Evelyn Hardin, and beaded hyperbolic marvels by Rebecca Peapples and Sue Von Ohlsen.

Also on exhibition at the Winter Garden show will also be the brand new New York Reef and the Chicago Reef. Both will remain on display through August 31, 2008. 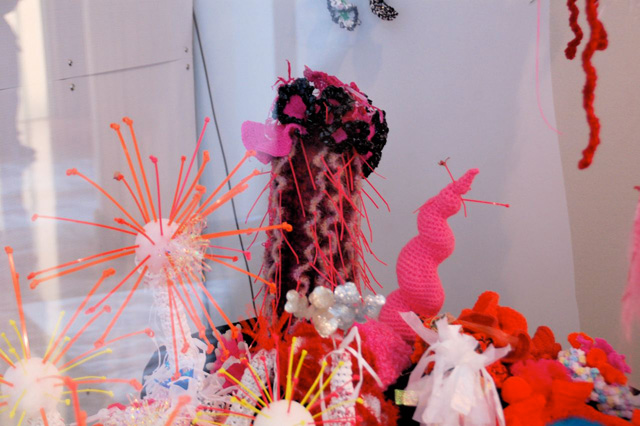 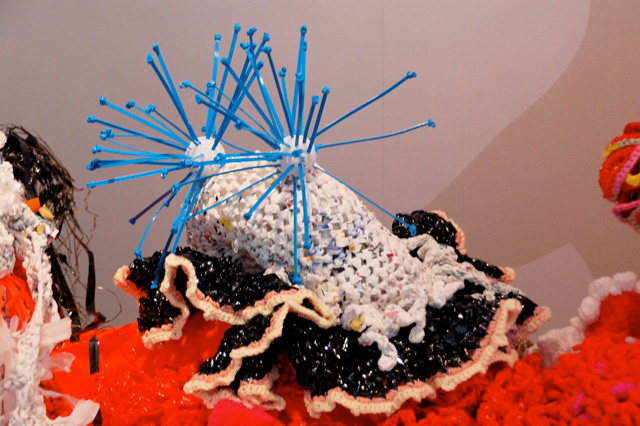 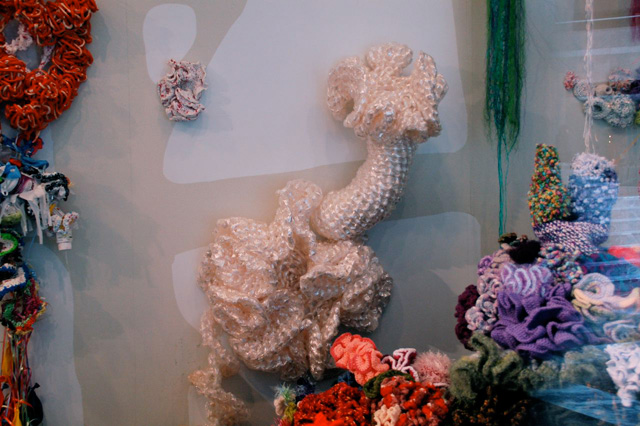 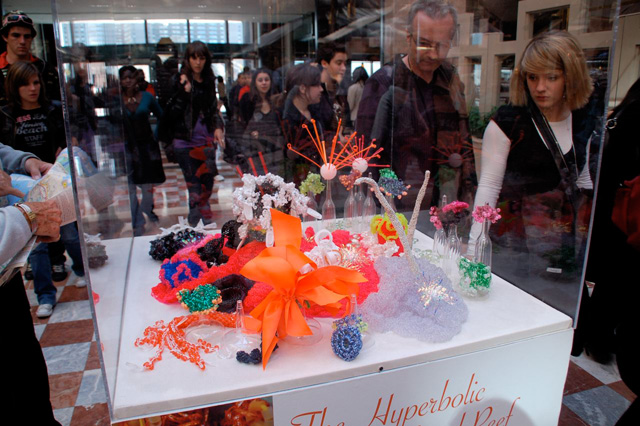 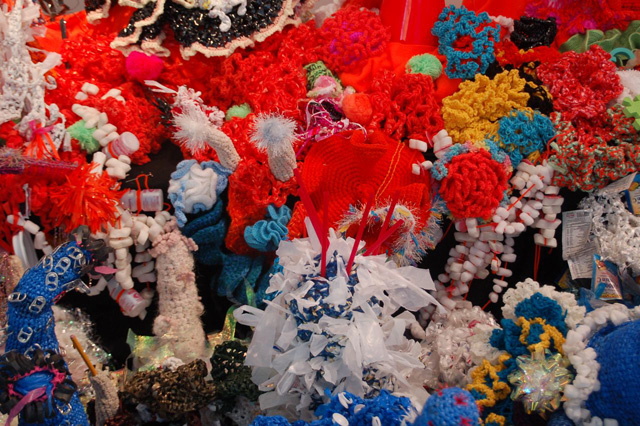 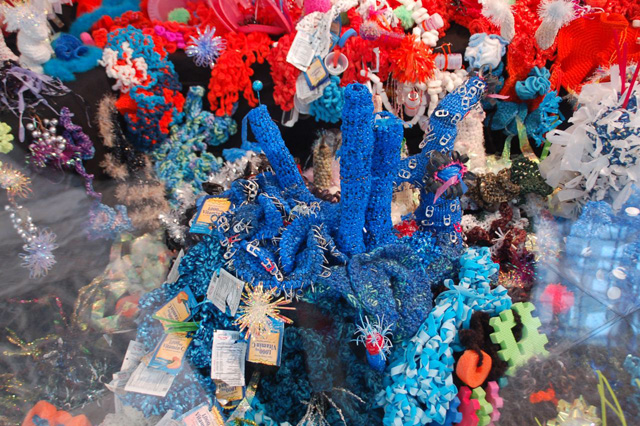 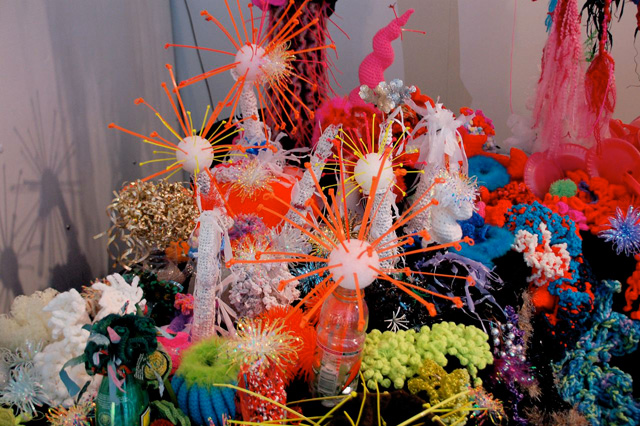 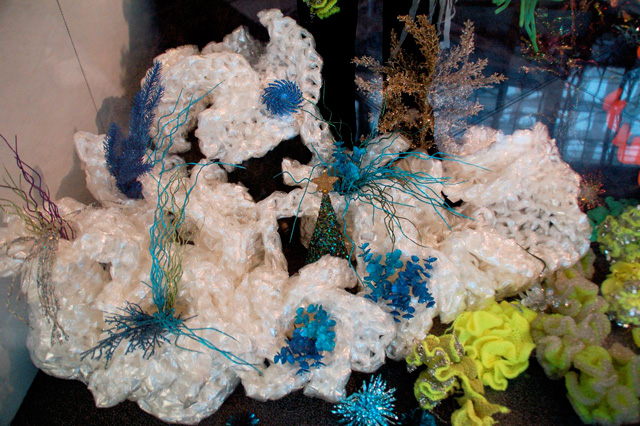 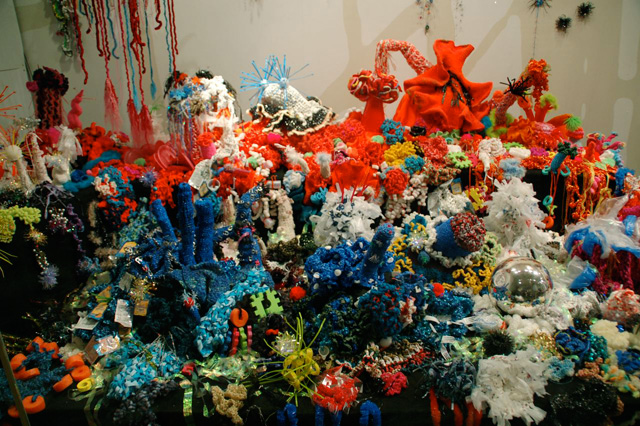 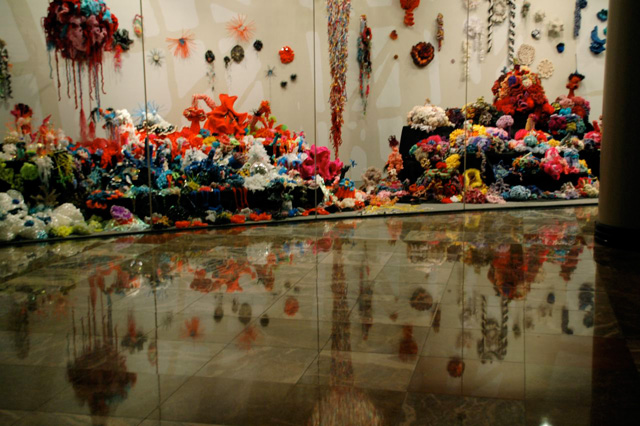 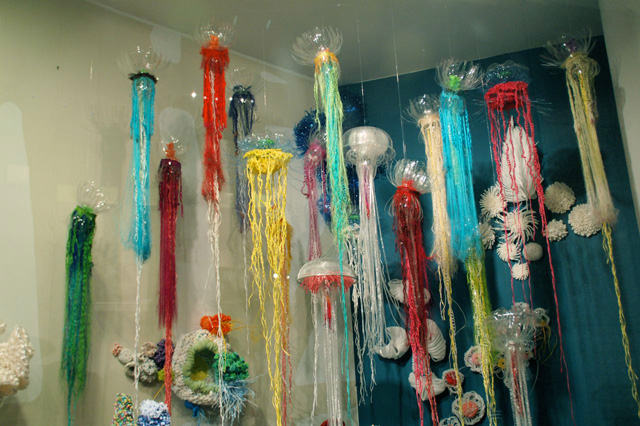 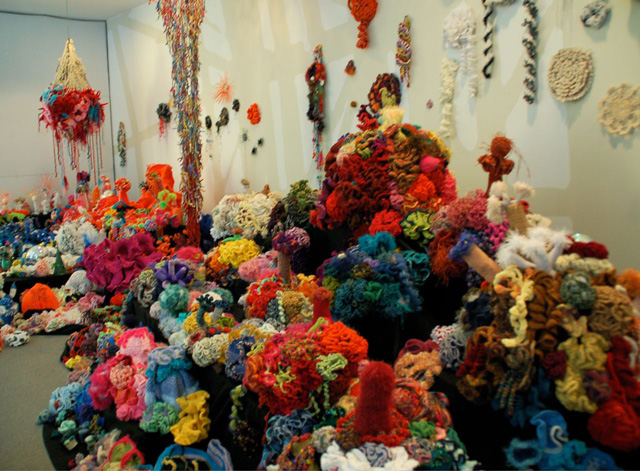 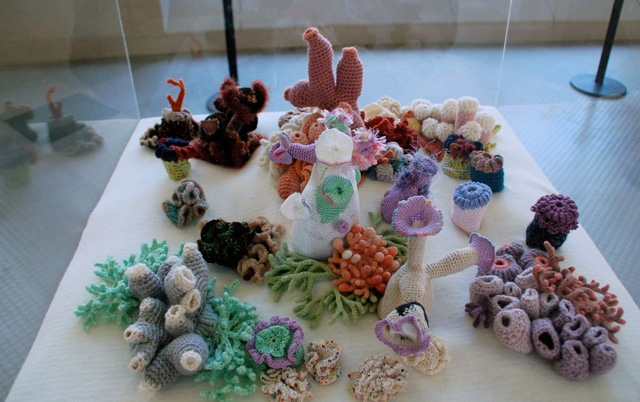 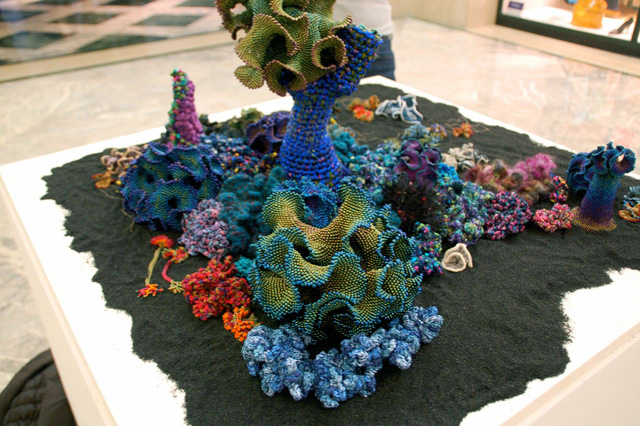 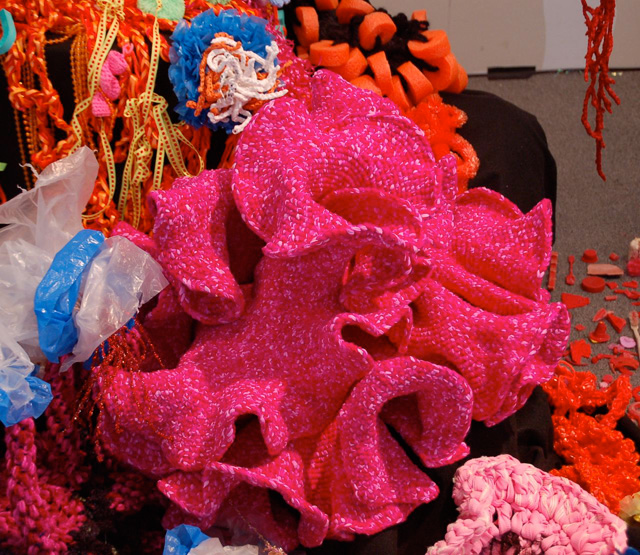 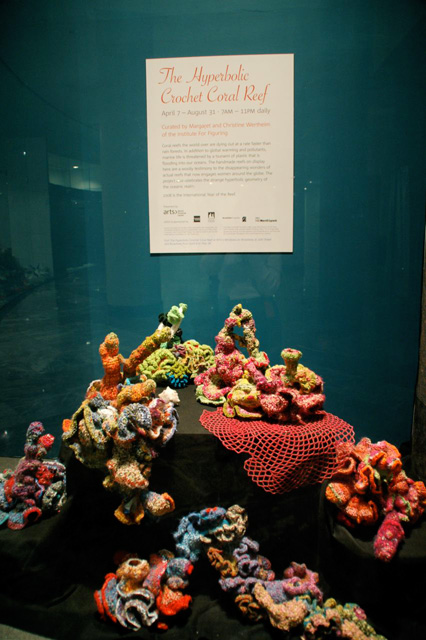 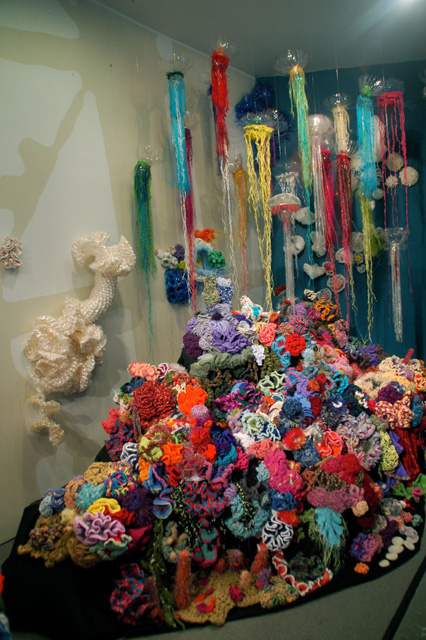 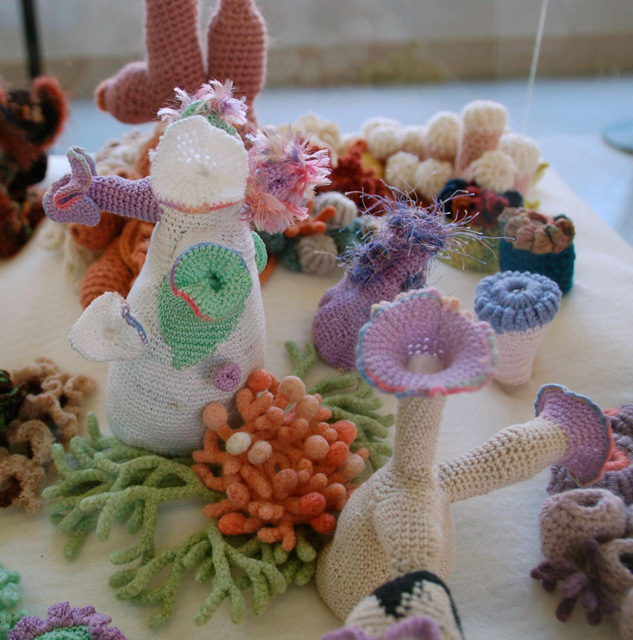 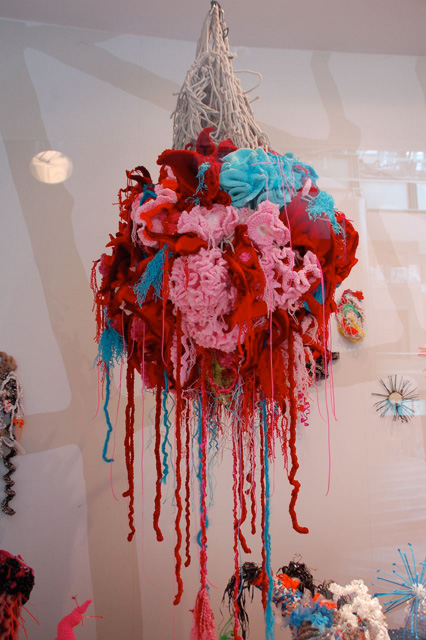 IFF directors and reef co-creators Margaret and Christine Wertheim will give an informal talk about the origin and evolution of the Crochet Reef Project and its many-tentacled, ever-expanding manifestations around the world. Irish contributor Inga Hamilton and Australian contributor Helle Jorgensen will also be in attendance to discuss their amazing works and techniques. Location: World Financial Center, Winter Garden (beside staircase)

IFF Director Margaret Wertheim will give a talk about the Crochet Reef Project, followed by a discussion with AMNH marine biologist Kate Holmes.

The New York Institute for the Humanities will host a crochet reef related symposium on pattern and peril in nature and art.

Morning Session 11am-12:30pm: An evocation of hyperbolic geometry and other mathematical structures in nature, and a discussion of how such natural forms inspire artists and handicrafters.

Afternoon Session 1:30-3pm: A discussion about the biology of coral reefs and the grave threats they face from global warming and plastic trash.

The Crochet Reef has become in total the work of many, many individual crafters around the world.

The New York Reef has been constructed under the auspices of the New York Crochet Guild and the Harlem Knitting Circle (with thanks to Barbara Hilary van Elsen and Njoya Angrum.)

The Chicago Reef was constructed under the auspices of the Jane Addams Hull-House Museum (with thanks to Catherine Chandler) and has been kindly lent for this exhibition by Hull-House and the more than 100 citizens of the Windy City who contributed to this work.

The NYU Broadway Windows exhibition is supported by NYU’s Sustainability Task Force and the Joanna S. and Dan Rose Foundation.

The Crochet Reef Project has been assisted by grants from the Andy Warhol Foundation for the Visual Arts and by the Norton Family Foundation.

Our very special thanks to Lawrence Weschler and Molly Sullivan at NYIH, Ruth Newman at Broadway Windows, and Karen Kitchen at arts>World Financial Center.