In association with the Chicago Humanities Festival, the Crochet Coral Reef is showing at the Chicago Cultural Center. Each year the Festival is organized around a thematic principle, with this year’s theme being Climate of Concern. In addition to the IFF reefs, the exhibition includes a sister-reef crocheted by the citizens of Chicago – an effort hosted by the Jane Addams Hull-House Museum.

During the exhibition, the Windy City Knitting Guild will conduct hyperbolic crochet workshops in the gallery. 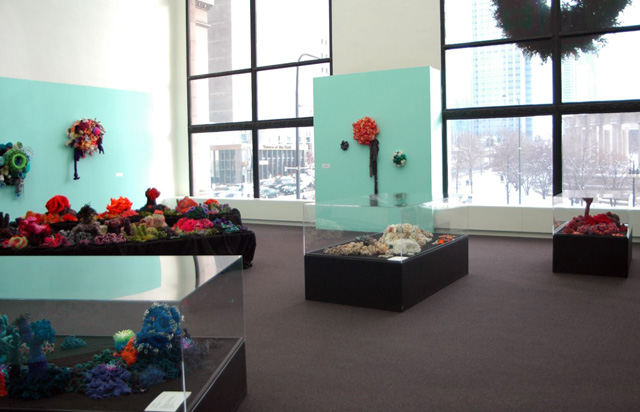 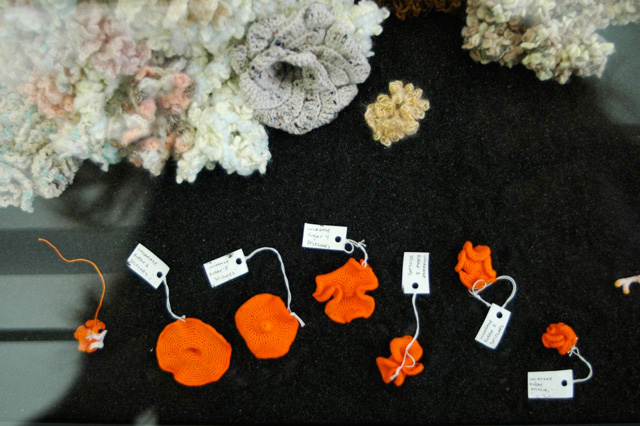 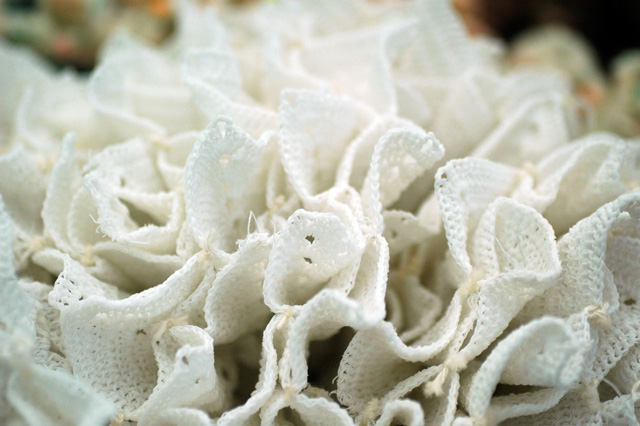 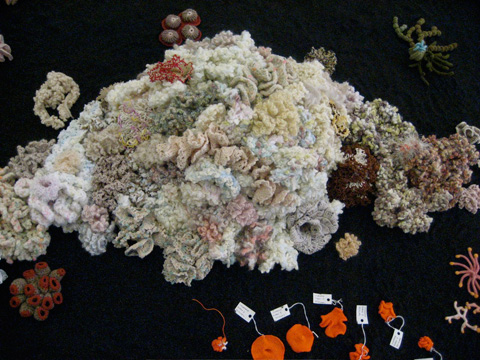 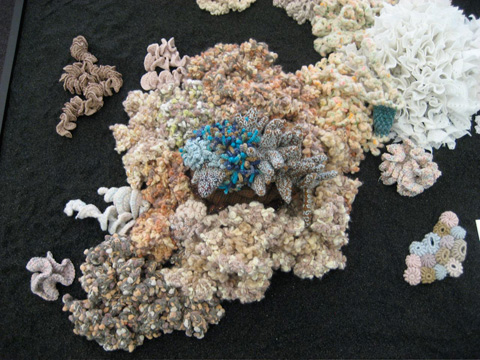 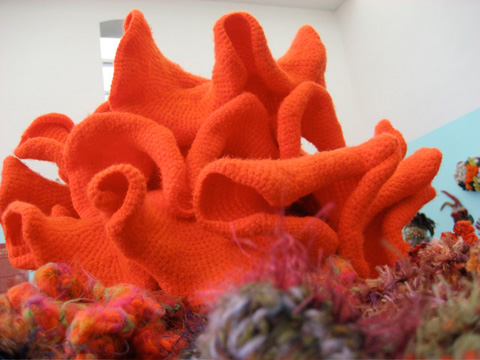 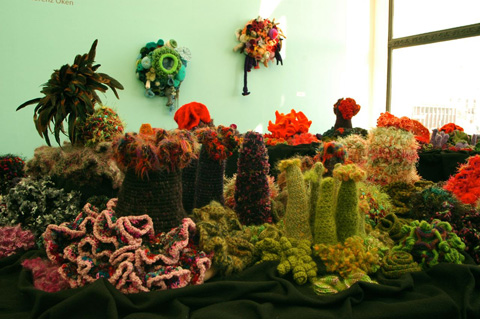 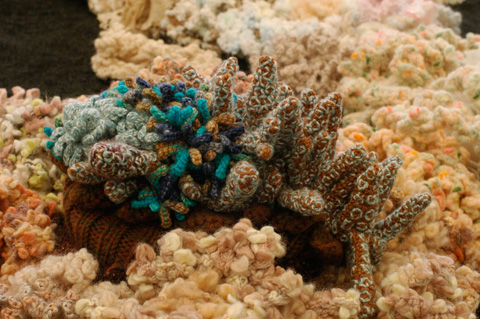 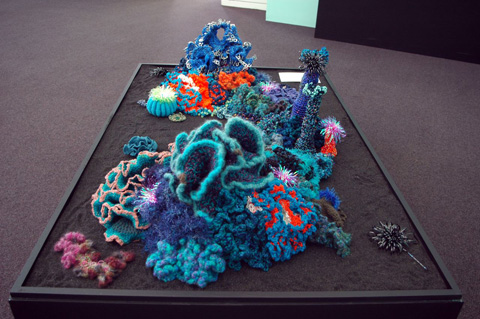 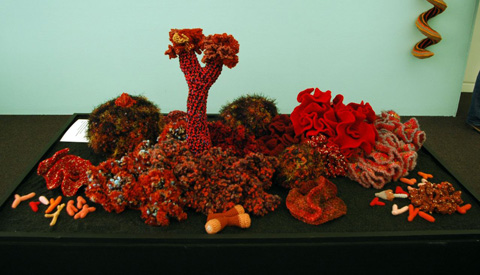 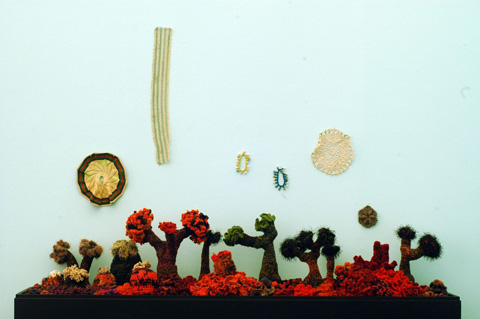 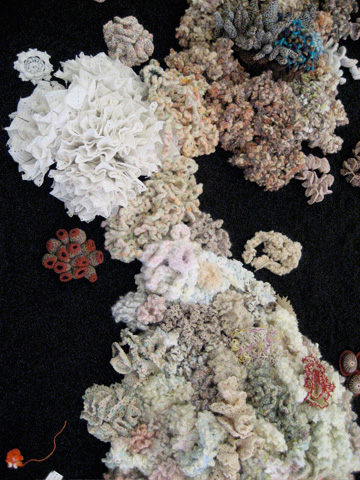 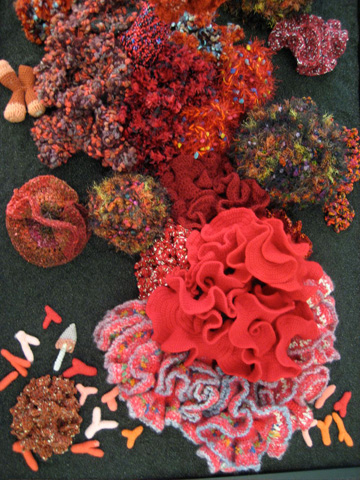 by Margaret Wertheim and Christine Wertheim

“We could crochet a coral reef,” Christine had mused, pointedly using the conditional tense while the woolly forms piled higher on our sideboard. We innocently put an announcement on the Institute For Figuring website seeking crafters to join us in this potential hyperbolic undertaking. From around the globe pictures started to arrive by email, then packages in the post. Helen Bernasconi, a former mathematics teacher and computer scientist, now sheep farmer in Bonnie Doon, Australia, sent in a fan-like form budding with hyperbolic curlicues made from wool she had sheared from her sheep, then spun and dyed herself. A Hungarian graphics designer in Liverpool, England, Ildiko Szabo, posted a shoebox of pastel-colored anemones. Heather McCarren, a PhD candidate in geoscience, mailed in a collection of tiny mercerized cotton florets. The tectonic plates of our continent shifted when Vonda McIntyre, the author of a novel about Louis XIV’s encounter with a sea monster, emailed photographs of her beaded jellyfish and flatworms.

Hooked now, we began trawling on Flickr and discovered Helle Jorgensen, a former research geneticist, who had given up academic science for a life of handicraft and beachcombing; Helle was crocheting sea creatures from plastic bags. A net search revealed that we were not the only ones hand-making coral. In the Australian town of Bendigo, Marianne Midelburg had already crocheted her own reef from yarns scavenged in thrift stores and junkyards; in Vienna, Petra Maitz was presiding over the “Lady Musgrave Reef”; in the 1960’s, Helen Lancaster had preceded us all with her appliquéd “Coral Forest.”

Each of these new outcrops realizes potentialities we had not even guessed at. In Rialto, CA, Shari Porter crochets hyperbolic forms guided by the Holy Spirit; latter day versions of the Shakers’ “gift drawings.” In Boston, Rebecca Peapples makes miniature marvels of beaded Byzantine splendor, while in Cedar Hill, Texas, Evelyn Hardin crafts a steady stream of woolly mutants seemingly coughed up from the stomach of some bilious leviathan.

Every person who takes up this craft creates new species of crochet organisms and we have come to see the project as a collective experiment in textile-based evolution. Just as all living creatures result from variations in an underlying DNA code, so the species in these handi-crafted reefs arise from deviations in a single simple algorithm. Slight variations in the kind of yarn, changes in the rate of increasing stitches, even shifts in crochet tension make significant differences to the morphology of the finished form. Sarah Simons in Culver City has invented an entire taxonomy of “radiolarians” by combining the insights of hyperbolic crochet with traditional doilies patterns.

Hyperbolic crochet was itself the outgrowth of an unexpected branch of geometry. For two thousand years mathematicians attempted to prove that the only possible geometries were the flat, or Euclidean, plane, and the sphere. Great minds expended themselves on the effort, only to discover in the nineteenth century that a third option was logically necessitated. The discovery of this new “hyperbolic space” ushered in the field of non-Euclidean geometry, the mathematics underpinning general relativity, which aims to describe the shape of the cosmos. Mathematicians’ skepticism about hyperbolic space had been based in part on their inability to imagine how it would look, for they had no way to model it physically. Most were thus astounded when, in 1997, Dr. Daina Taimina, a Latvian émigré at Cornell University, presented a hyperbolic structure made with crochet.

Nature, meanwhile, had discovered the form in the Silurian age. Lettuces and kales – the crenellated vegetables – are manifestations of nearly hyperbolic surfaces, while in the oceans, corals, kelps, sponges, nudibranchs and flatworms all exhibit hyperbolic anatomical features. And so a woolly manifestation of a reef is not as unlikely as may first be supposed. Through the lens of crochet we may thus discern a hitherto unsuspected line connecting Euclid to sea slugs. Ways of constructing once perceived as “merely” women’s craft, and dismissed from the cannon of scientific practice, now emerge as revelatory forms of a more complex, embodied way of thinking about the world both mathematically and physically.

“Everything has been created out of sea-mucous, for love arises from the foam” wrote the German polymath Lorenz Oken in his Elements of Physiophilosophy, a poetico-scientific account of evolutionary processes that preceded Darwin by nearly half a century. From simple mucul protoplasts, Oken imagined the spectrum of life unfolding over the eons. Coral reefs, too, are generated from protoplasmal seeds: On a single night, timed to the cycles of sun and moon, whole sections of reef release gametes into the water in a mass-synchronized spawning ritual. These spectacular displays allow sessile coral polyps, which cannot move themselves to disperse offspring over vast distances. So too crochet reefs send out spawns. Starting from an initial garden of anemones and kelp, the IFF and our contributors have now produced a variety of different sub-reefs, while other crafters have been inspired to their own fully formed wonders: among them, the mysterious Dr Axt in Portland, Inga Hamilton in Belfast, and Barbara Wertheim in Melbourne. The Chicago Reef exhibited here is a magnificent result of this spawning, a communal triumph created by more than a hundred Windy City women, who have each, as it were, inhaled a hyperbolic spore.

But this collective celebration is motivated also by an ecological urgency, for coral is being devastated by global warming, agricultural run-off, urban effluent and marine pollutants. 3000 square kilometers of living reef are lost every year, nearly five times the rate of rainforest elimination. Ironically, as reefs disappear a sinister substitute is growing beneath the waves: In the north Pacific ocean the world’s plastic garbage is accumulating, fifty years of plastic trash building into a vortex twice the size of Texas and 30 meters deep. The Great Pacific Garbage Patch, as it is known, is a ghastly analog to the Great Barrier Reef, an aquatic “wonder” of appalling dimensions that continues to accrete. To highlight this monstrosity and our own role in its making, the latest spawn of the IFF is a toxic reef called Bikini Atoll – a hybrid assemblage made from yarn and plastic garbage. Our challenge for the future – and the reason we have chosen to exhibit this work– is to help raise awareness of this plastic problem, an ecological cancer whose stain will mar our planet’s face for geological time. 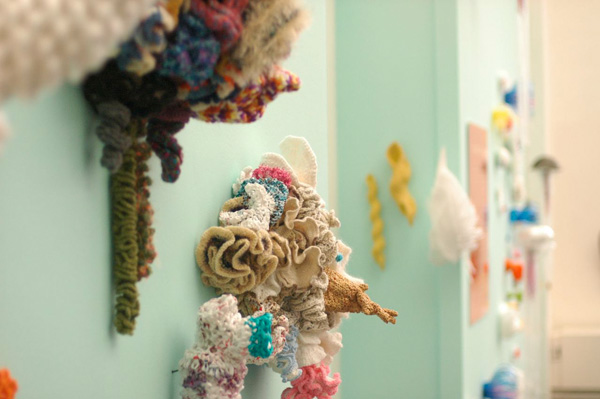 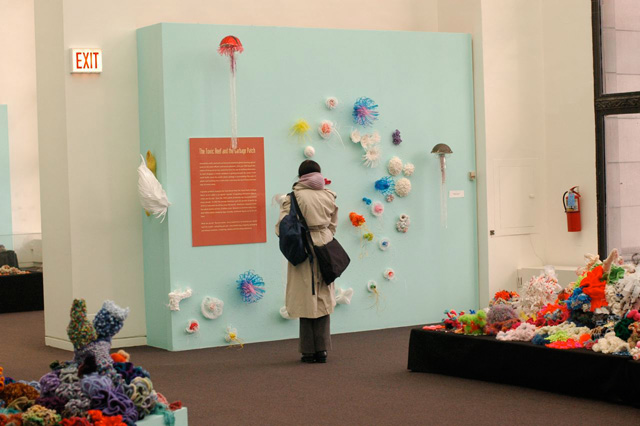 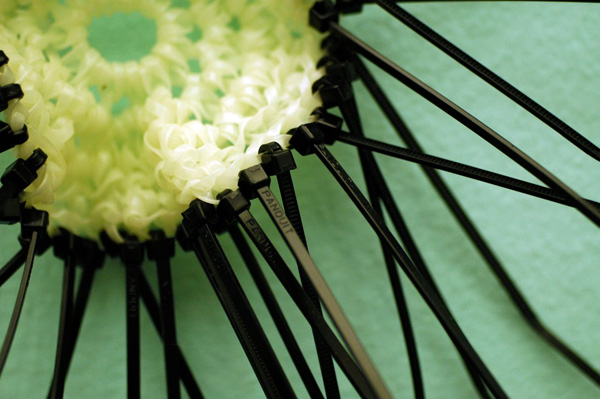 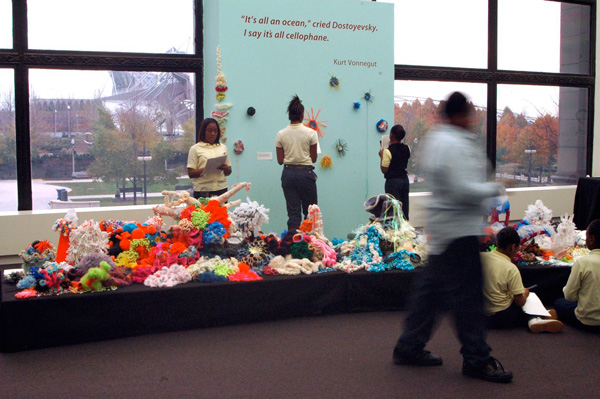 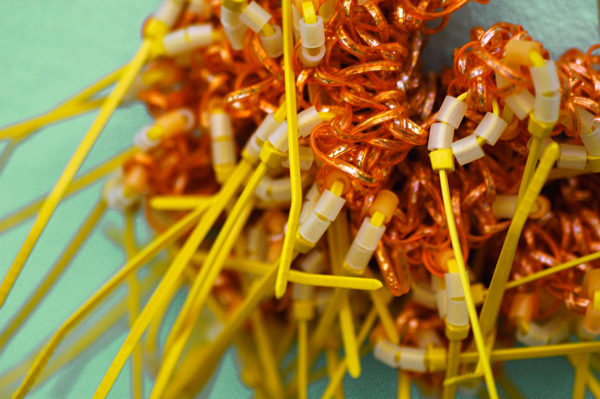 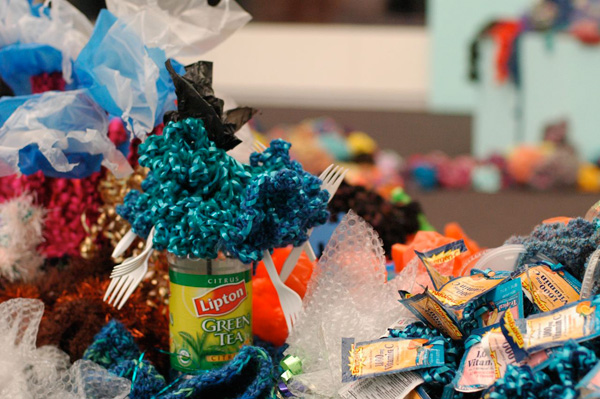 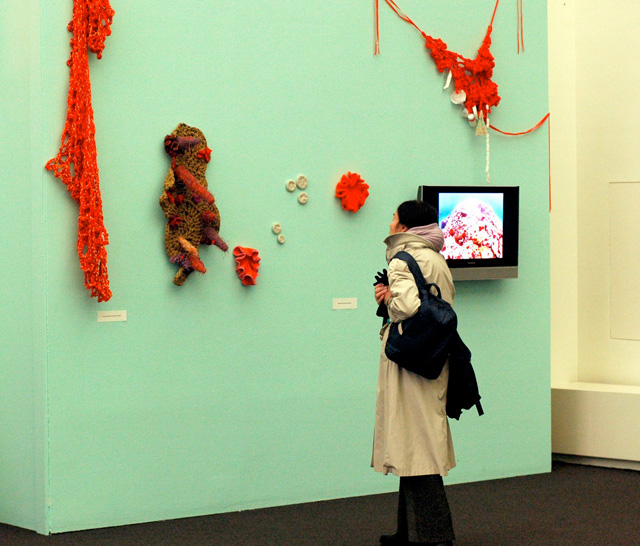 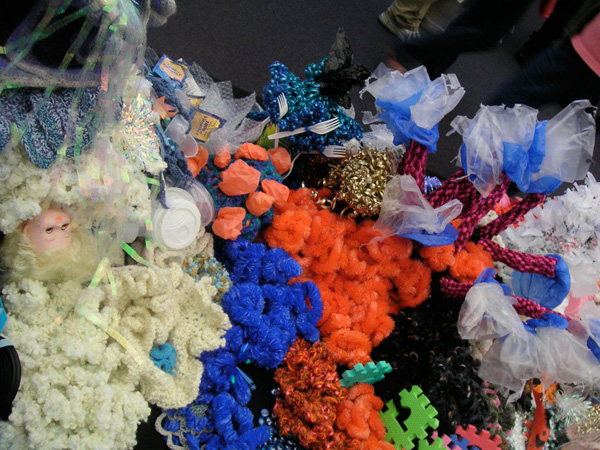 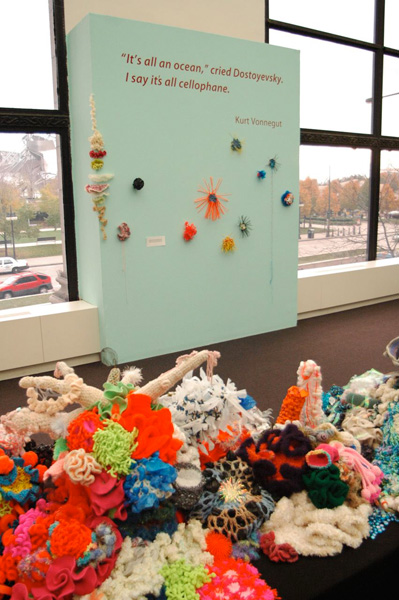 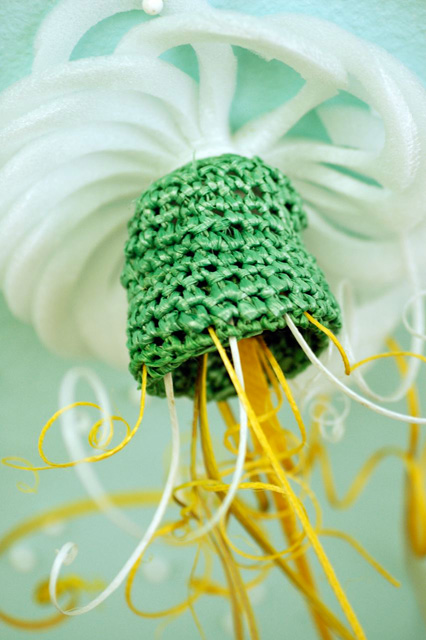 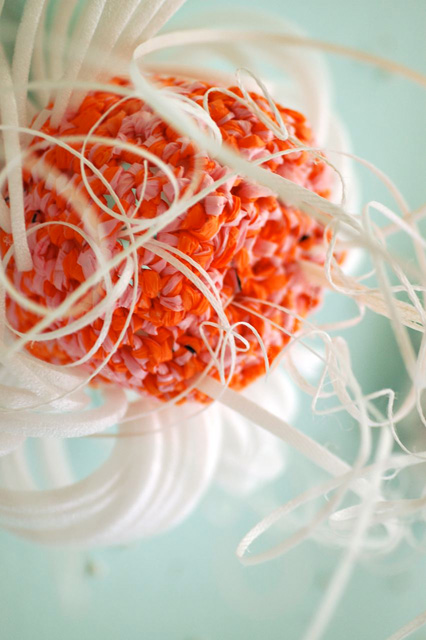 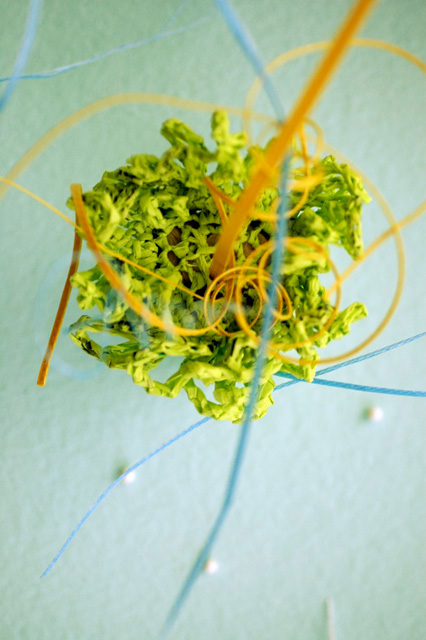 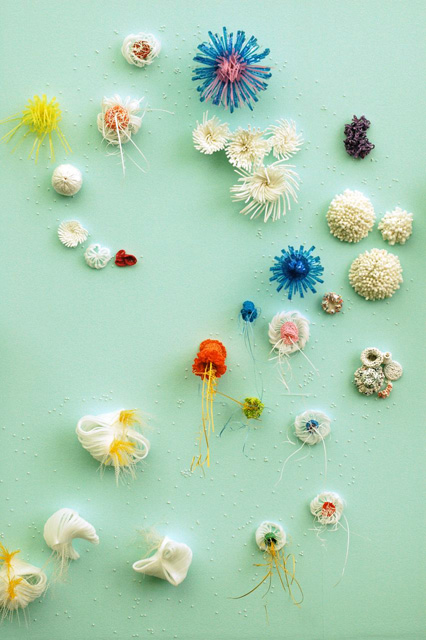 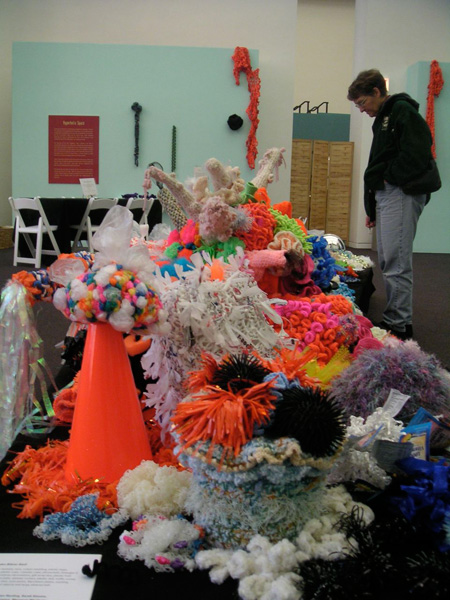 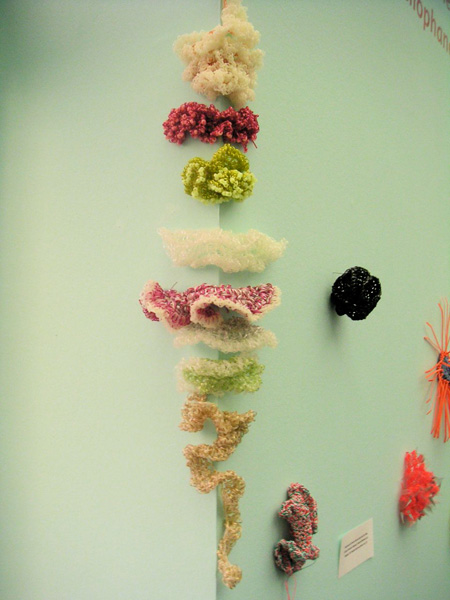 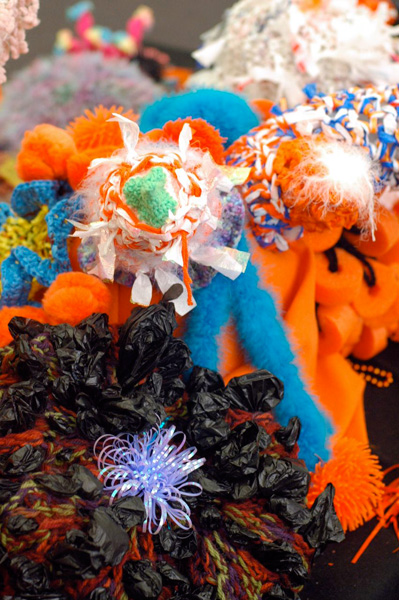 And coming soon! Beaded hyperbolics by Rebecca Peapples (Ann Arbor, MI) and The Other Coral Reef by Dr. Axt (Portland, OR).

The Crochet Reef Project has been assisted by grants from the Andy Warhol Foundation for the Visual Arts and the Annenberg Foundation.